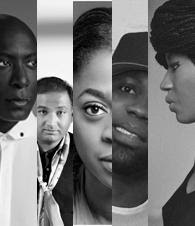 With over 19 international events under its belt – a world-class magazine that is distributed in over 27 countries (including an 8-page advertisement promotion inside the iconic September 2012 edition of Vogue US) – ARISE is firmly established as the most significant iconic African brand; and its presentation: “African Icons” at the Lincoln Center on Thursday 6th September 2012, celebrated its return to New York to another packed house and a standing ovation from its 1,000-devoted followers and a celebrity audience including Tyson Chandler, Angela Simmons, June Ambrose, Olivia, Shontelle, Alexandra Burke, and June Sarpong.ARISE’s specially selected African Icons designers were:Ozwald Boateng OBEGavin RajahTiffany AmberTsemaye BinitieMaki OhHere’s what ARISE’s five African Icons had to say:

Ozwald Boateng OBE (UK/Ghana):
“I wanted to support the important work ARISE is doing for African fashion. It’s good to help bring the stylistic messages of the AMFW experience of Lagos to New York. I have a good following in the States and have showed solo at NYFW three times…If you’re interested in the American consumer. NYFW is where it’s at.”Gavin Rajah (South Africa):“My US clients appreciate my craftsmanship and meticulous attention to detail. By showing my luxe pret-a-porter
collection last night, it was great to fly the flag for South Africa.”

Tiffany Amber (Nigeria):“I have a special place in my heart for the ARISE shows. It felt surreal to walk down the runway again. It was like we were at a party thrown by the world. I loved it and can’t wait to do it again…”Tsemaye Binitie (UK/Nigeria):“From the backstage production and calibre of models, to working with world-class stylists and make-up artists –
and being at the Lincoln Center… It was all wow!”Maki Oh (Nigeria):“I have put my ‘AMFW Designer of the Year’ Award on my dining table, beside an amethyst candle holder and other awards I’ve won. I was excited about the whole line-up ARISE had chosen. Great times ahead…”The five designers all participated at the ARISE Magazine Fashion Week (AMFW 2012) showcase in Lagos, Nigeria. The event was held over five days in March 2012 and featured a staggering 77 designers. Of those 77 designers who participated in Lagos, FIVE African designers won the coveted prize to showcase their Spring 2013 designs and represent the ARISE brand, as a part of its self-styled themed: African Icons.ARISE Magazine founder Nduka Obaigbena said: “There has been a surge of interest from around the world including major UK and American brands, which is why ARISE will continue to give designers from Africa and the diaspora, an opportunity to be put on the world’s fashion map. The world has recognised that ARISE has much to offer and has put Africa firmly on everyone’s agenda. Once more we are proud to have supported these gifted designers and our association with IMG and Mercedes-Benz Fashion Week working  in partnership with us.”London’s legendary; Royal Albert Hall was the setting for the successful inauguration of the first issue of ARISE Magazine on Tuesday, October 15th, 2008.To launch the magazine in the U.S., ARISE partnered with IMG’s hugely successful, Mercedes-Benz New York Fashion Week and created a global platform for premiere African fashion designers to show their collections. As such, this endeavour has led to various, critically acclaimed fashion shows around the world, these include: – ARISE African Fashion Collective IMG Mercedes Benz, New York   Fashion Week, February 2009. – ARISE Africa Fashion Week, Johannesburg, June 2009. – ARISE Cape Town Fashion Week, August 2009. – ARISE Promise of Africa Collective, NYFW, September 2009. – ARISE Africa Collective III, NYFW, February 2010. – ARISE L’Afrique A Porter, Paris, March 2010. – ARISE Magazine Fashion Week, Lagos, March 2011 and 2012.