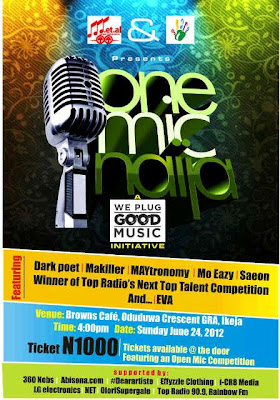 It seems like just a few weeks ago that One Mic Naija, the fastest growing live artiste showcase in Nigeria, was giving us good music, live but it in a few days, they will be doing more of that as #OneMicJune comes around!

This time, One Mic Naija returns to the Mainland, where as the organisers explain, some of the shows this year will hold. Browns’ Cafe, the home of One Mic Naija on the mainland will once again come alive on Sunday June 24th as rappers, singers and more perform with the excellent One Mic Naija band!

The artistes on the bill for this edition are
–          Rapper and Wax Lyrical co-host, DARK POET.  Real name, Femi Odukoya, Dark Poet can be heard on Dagrin’s album and has three singles from his debut album out plus a new mixtape (Unmixed) recently released.
–          Makiller (M.A.K) is a 300 level undergraduate of the University of Lagos but is passionate
about music. He can be heard on Ex-O’s mixtape ‘Hip hop Speaks’ on the track ‘The coalition’ and on M.I’s ‘Illegal Music 2’ on ‘Eyes’.
–          Maytronomy is signed to Effyzzie Music Group. He is not only a rapper who sings, but he is also a fantastic songwriter, having written songs for artistes like Faye, Waje, Praize and Yemi Alade.
–          Mo Eazy is signed to Darey’s Soul Muzik. His single ‘ko soro’ has made an impact on radio and he recently shot a video for it. He is a multi-instrumentalist, producer, songwriter and performing artiste.
–          Saeon describes herself as sexy-tough, sassy-burlesque! An amazing vocalist and hardworker, she has covered Brymo’s ”Ara”, worked on several songs including ‘London’ with Phizzle and has released ‘Lie’ featuring Flowsick.
Other performers are, the winner of Top Radio’s Next Top Talent competition and this month’s headliner, EVA
–          Next Top Talent competition on Top Radio seeks to find a talented artiste who gets to work with Vector on a remix of their song, gets free production courtesy Kollo Music, a video directed by Akin Alabi films, and performs at One Mic Naija
–          EVA is Trybe Records latest signee. A rapper/entertainer, creative writer, fashion designer and blogger, prolific and talented Eva will be performing some of her hit songs as well as unreleased material at #OneMicJune
With this blend, One Mic Naija promises to deliver another excellent evening out and the ticket prices remain the same- N1000. There will, as usual, also be an Open Mic session supported by Coldflames Production and LG Electronics.