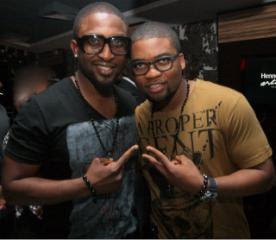 The multiple award-winner says he first noticed the young rapper's remarkable talent while working in London many years back.

Mo'Eazy is a very talented artiste and I am happy he is the first artiste we'd be signing at Soul Muzik. I also like the fact that he is determined and hard working, and we are committed to seeing that he achieves all that he sets to do' Darey says

His first single “Ko Soro” which I co-produced will be released this week, and I can't help but feel like a proud father”Kosoro, meaning 'end of discussion' in Yoruba is a feel good song, a fun filled track that celebrates the liberal spirit. Mo' Eazy's first official single from Soul Muzik reflects his infectious personality and swagger and pays no attention to haters of fun. This track gives you the time of your life and shows you how a real star starts a party. The song was produced by Soul Muzik, co-produced by Darey Art Alade and written by Mo'Eazy.Since his return from the UK , Mo' Eazy has performed at various events within and outside Nigeria. He released his first official single with Soul Muzik titled

Coming back to Nigeria to continue music was a huge step for me but I am glad I took that step because I have met a lot of inspiring people along the way. Working with Darey and getting signed under Soul Muzik Records is a huge achievement for me because I am now working with a very experienced management. Work is already in progress as we are working on a couple of tracks already and I released my first single with Soul Muzik on Wednesday, February 22, 2012. A music video is also in the works so I must say I am pleased to be part of this team!”Since signing with Soul Muzik,

Mo'Eazy's profile has risen tremendously. He has collaborated with major Nigerian artistes such as Darey, 2face and Modenine. He has already recorded over 25 tracks in Soul Muzik Studios in preparation for his yet untitled debut album. Without an album out in Nigeria, he has already played some of the biggest stages, such as the Calabar Carnival and Rhythm Unplugged sharing the stage with

D'banj, P Square, 2face, Wizkid, Darey and a host of others.

There's much promise for the rising star, as he continues to add to his growing fan base by connecting with new and old fans alike via social media as well as performing constantly at events across Nigeria and the rest of Africa.

Nothing but love! Nigerian Idol joins the ...