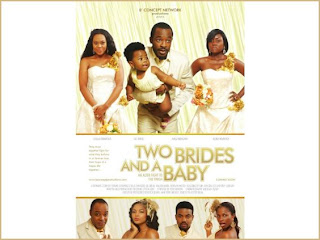 The yet to be released ‘Two Brides and a Baby’, starring Stella Damasus, Kalu Ikeagwu, Keira Hewatch, O.C Ukeje, Okey Uzoeshi, Chelsea Eze, Blessing Egbe and others has added a new leaf to it already envious cap of positive reviews and awards as it bags twelve nominations from the prestigious Nollywood award, the Best of Nollywood Award (BON).

Produced by ex-international model but now actress, Blessing Effiom Egbe, and directed by Teco Benson, ‘Two Brides & a Baby’  will be premiered on November 17 will hit Nigerian Cinemas on November 25, 2011.
‘It all begins on the day before the wedding, during the wedding rehearsal, surrounded by friends and family; the every bride’s worst nightmare takes place! The groom’s ex-girlfriend shows up, bringing along a basket full of drama!   Every corner is shaken as a cupboard full of secrets are opened, exposing concealed reactions of everyone directly involved, including a challenged married couple and a troubled engaged couple. Two Brides and a Baby’ is a beautifully crafted romantic comedy about Keche and Bankole whose plan to walk down the aisle was jeopardised by emergence of the other woman. Chains of events within 24-hours spiral the ‘perfect relationship’ out of control and the two must weigh whether to risk the moment or stake the future on what they feel.

Speaking on the nomination, Blessing Egbe says the 12 nominations shows that hard work pays. ‘We went extra miles for the movie, as I speak to you; we are still going extra miles. We wanted something very unique from what is obtainable in the market, the story isn’t your regular run of the mills, the casting was done painstakingly, and the technical input was close to perfection while the director gave it his all. This nominations show that hard work pays. We hope for the best and we believe our best is yet to come’.