Beyonce crowned as one of the powerful women in US 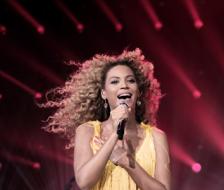 Beyonce has been crowned by Forbes as one of the most powerful black women in the US, getting the honor of being the only musician on the list alongside Oprah Winfrey, Debra Lee, Tyra Banks and several others, Beyonce has been recognised for her notable influence in both the media and American community as a whole.
Bey’s net worth is an estimated $300 million after earning $35 million from early 2010 to early 2011.