2FACE, WIZKID, MO’CHEDDAH AND OTHERS TEAM UP FOR HEADIES 2011 THEME SONG

OSG Admin
0
2FACE, WIZKID, MO’CHEDDAH AND OTHERS TEAM UP FOR HEADIES 2011 THEME SONG …. AS ORGANISERS PLAN FOR ARTISTES SEMINAR 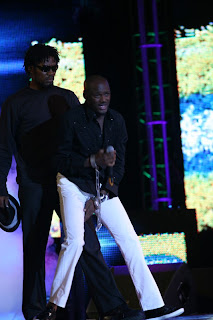 Organizers of the annual The Headies have announced a long list of
stars working on theme song for this year’s edition of the awards.
According to Executive producer Ayo Animashaun African pop icon 2face will be teaming up with rave of the moment Wizkid, Mo’cheddah, Ice
prince, Waje, and Illbliss to work on the 2011 theme song for the
awards which will be produced by fast rising producer Samklef.
At the ‘theme song’ meeting held recently, all the performing artistes
were briefed on the upcoming awards and details of their assignment as
related to what the audience should expect from the awards this year.
Animashaun says: “In 2009, the theme song, “A Prize to Die For” was
recorded by M.I, Kel and Banky W while Eldee Tha Don produced. The
song was released a week before the Awards and did not have enough
time to sink into the public. This was why we decided to use only the
beat in 2010. This year, all hands are on deck to ensure an earlier release which will be followed with the video. And with this set of acts be assured we shall come up with another smash hit that communicate the theme for this year’s event: as well as the key values of our awards’’. Reacting to the brief, Ice Prince thanked the organizers saying, “I’m
privileged to be a part of this theme song and these guys are my
friends so we should have fun on this project”. “This is our time, the last theme song was produced by old artistes” Wizkid, sarcastically referring to Banky W and M.I.

Gorgeous vocalist, Waje said “I’m ready and capable to deliver on the theme song and fans should expect nothing but the best”. An elated Samklef who will be producing the soon to be titled track
also said “Working with all these talented artistes is going to be a
challenge and the outcome will be something great’’. Meanwhile organizers of the mega music event have announced plans to hold a seminar for music artistes and stakeholders in the music
industry. The seminar according to the organizers is part of efforts to
sensitize them on the rules, details of sending in entries for
nomination, and the unveiling of the selection committee for the
awards ceremony. Past Headies nominees and winners are being expected at the seminar as
well as hopefuls for this year’s edition. Recently organizers announced Rita Dominic and Eldee Tha Don as host for this year’s award. The Headies since debuting in 2006 has become
one of the most anticipated events in Nigeria.

SAX APPEAL: WHO WINS THE BATTLE OF ...