GT the Guitarman, Plus One , Adol for MUSIC 4UR SOUL 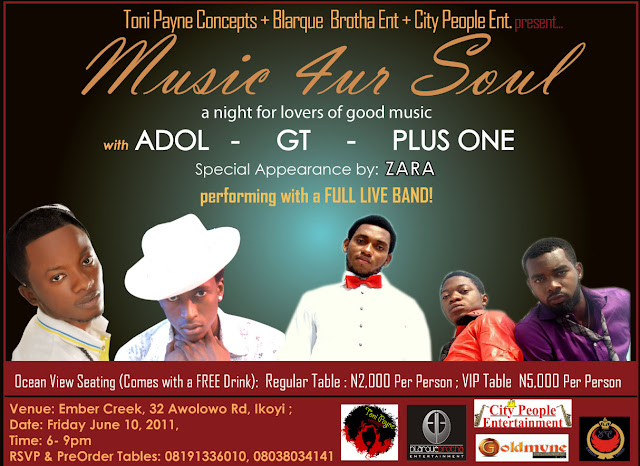 GT The Guitarman is a contemporary Soul/R&B singer, songwriter and producer. His smooth, sultry and seductive style is reminiscent of the classic soul of yesteryear. GT’s music comes from the heart and speaks to the soul with his heartfelt and emotive lyrics. He has an album (The Truth) to his credit and has achieved many accolades. ‘Dreamer’, the first single off his debut album was an instant hit. He is currently working on his sophomore album.

Adol, known to have one of the richest voices in the Nigerian Music Industry, shot to the limelight with his first single titled Orin. In March 2011, he released an album also titled “Orin”, which contains hit songs like Gugu Gaga, Omoge, Ghetto Life and more. He has since won himself respect and fans across Nigeria and beyond. Adol’s angelic voice and believable rendition of songs is what sets him apart from his peers. Managed by one of the most reputable management companies around, Adol is definitely on top of his game.

Plus One is a Nigerian pop group that’s rocked stages and held fans spellbound home and abroad. Their first single Tin Kon Ko, attracted rave reviews and mad airplay on both radio and TV, this instantly won the group fans and following from far and near. With an album ‘Commercial Class’ and awards to their credit, this trio is sure to be on top for many years to come.

A night for lovers of good, classic evergreen tunes, rendered by young, energetic and talented love supremes of the Nigeria music industry. GT, Adol and Plus One with full band live onstage, 6pm sharp on Friday June 10, 2011. For table reservation call: 08191336010 or
08038034141.

GET BUSY , GET INSPIRED YOUTH FORUM