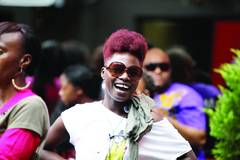 And so long the red panga. Oh cry the beloved Tails house.
In an unceremonious turn of events on Friday, Tanzania’s Lotus was disqualified from Big Brother Amplified. As much as it was a SLAP in the face for some  Namibians that our Jossy Joss was the first housemate to be evicted from BBA Amplified, I’m sure it’s an even bigger SLAP for Tanzania, and all Lotus enthusiasts to learn that their Lotus was disqualified so soon in the game.
And the man at the centre of this mess is none other than resident drama queen Luclay – oh, and of course his South African currency. If Luclay is not hurling insults at Biggie, then he’s busy directing those insults at his housemates. This boy really needs to be SLAPPED!

Slap Me!
Just last week, Lotus asked Big Brother to supply some condoms for the house. Surely this was a sign of a woman getting comfortable with her set-up. As you may have guessed, she and Ethiopian Danny were starting to get cosy!
Fast forward to Friday and Lotus was packing her bags and bidding the BBA experience goodbye.
I will say it again, “Luclay needs to be SLAPPED!”
Anyhow, while most of us were wishing for time to fly on Friday so that the weekend could start already, developments in the BBA Tails house were going in the opposite direction. It all started with the Head of House Task quiz testing housemates on their knowledge of world currencies. Housemates had to fill in as many currencies of the world as they knew.

On this list was South Africa, which Lotus in all her red panga glory, forgot to fill in.
Realising her mistake, Lotus informed her mature and well behaved housemates of her error, an error which drama queen Luclay unfortunately deemed unforgivable. Ohhhh puhleeeeeze!
As if that’s not enough, he accused Lotus of not respecting her host country. The more Lotus tried to reason, the more Luclay would have none of it and just continued to scratch Lotus where it wasn’t itching.
And there was no stopping Luclay, not even after Lotus shed a few tears and urged him to ‘PLEASE STOP’.
Lotus finally lost her cool and planted a slap on Luclay’s face, which at least finally shut the boy up. Unfortunately, though, it led to Biggy’s decision to disqualify Lotus.
In terms of the BBA rules and regulations, physical violence of any kind is prohibited and the use of it will result in disqualification.

For his part in the altercation, Luclay walks away with the light sentence of washing dishes and cleaning the house for the duration of his stay.
If that is what they call justice, then my journalism qualifications over-qualify me for the role of judge!
Kim could not hold back her tears as she watched Lotus pack her bags with help fellow housemates Nick, Danny, Karen and Mumba.
To add salt to injury, Luclay had the audacity to shed tears as Lotus left.

Whether they were tears of remorse or joy I cannot tell but this is an exercise Luclay is accustomed to indulging in after every fight he’s involved in, so I’m not surprised. Did I mention that the boy is emotionally unstable? Not only can he not control his outbursts, it seems he finds it difficult to control his tears. This is the umpteenth time he’s cried in the house.

How to Identify the Best Social Network ...