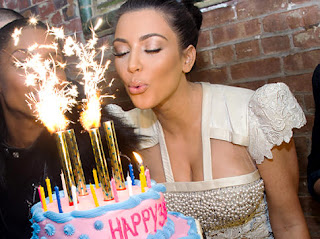 Kim Kardashian got the birthday bumps this weekend.
While celebrating the first of her two birthday bashes -– one at Tao Las Vegas, the other at Tao New York — the soon-to-be-30 reality star was wrestled to the ground by younger sister, Khloe.
“Omg,” Kim tweeted from Vegas on Friday. “Khloe Kardashian is attacking me!!!”
The incident occurred after the 29-year-old reality star was pummeled by her own shoes, spiked silver Louboutins that matched her silver John Richmond minidress.
“I accidentally spiked myself and cut my own foot,” Kim told eonline.com. “It was bleeding and I had to stop and clean it up!’
But the scuffles didn’t prevent the “Keeping Up with the Kardashians” star from getting her drink on to celebrate the 10th anniversary of Tao as well as her own birthday.
“One white russian coming up!” she tweeted during the night. “Hmmm who can I drunk dial tonight?”
Providing the night’s soundtrack was ex-Destiny’s Child singer Kelly Rowland, who sang “Bootylicious” for the star and her famous rear end.