PRESIDENT BUHARI SUED TO COURT OVER APPOINTMENT OF NIA BOSS

President Buhari has been called to court by the concerned people of Nigeria. On the 11th of January 2018 , the president appointed Abubakar to head the Nigerian apex intelligence agency, an organization saddled with the external security of the country.

Abubakar had earlier been forced out of the National Intelligence Agency (NIA) for allegedly failing two promotion exams.

Mr. Abubakar is the Arabic and French interpreter to President Buhari.

In the details in the suits, Barrister Michael Ukasare and Arinze Solomon Egbo both filed the suits on behalf of the plaintiff, Deji Adeyanju for Concerned Nigerians.

In the summons, President Federal Republic of Nigeria, Ahmed Rufa’i Abubakar (Director General of the National Intelligence Agency) and the Attorney General of the Federation, are to appear as the first, second and third defendants.

The summon was brought under Order 3 Rule 6 and 7 of the Federal High Court (Civil Procedure) Rules 2009, and inherent jurisdiction of this honorable court.

The summon was brought for the determination of the following questions:

2) Whether by the provisions of section 2(3) of the National Security Agencies Act, the 2nd defendant (Abubakar) is a fit and proper person to be appointed as director general of the National Intelligence Agency. 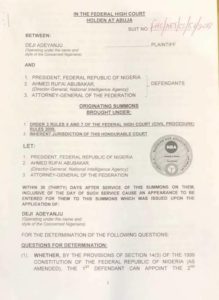 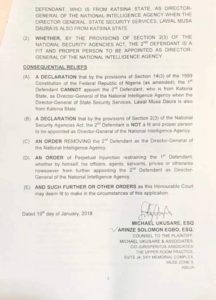 It was also said that $44 million was removed to an unknown destination the very day the new DG was appointed. Concerns were also expressed that the new NIA boss is from Buhari’s home state of Katsina just like his counterpart in the Department of State Service.