Former Minister of Aviation, Femi Fani-Kayode, has rejected his inclusion in a list of alleged looters released by the Nigerian government on Sunday. 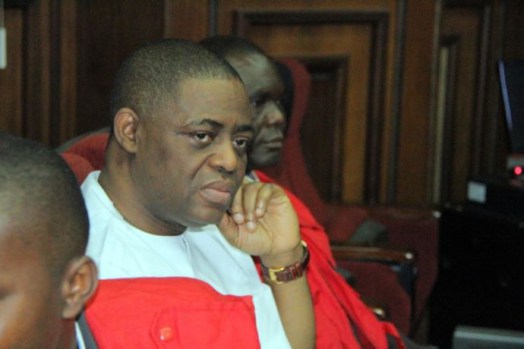 Releasing the fresh list, the minister for information said based on the Economic and Financial Crimes Commission’s investigation, N126bn, $1.5bn and £5.5m were allegedly embezzled through Sambo Dasuki office as the NSA.

The amounts, it alleged, were apart from the ongoing $2.1bn military equipment scandal.

Mohammed further alleged that a former Petroleum Resources Minister Diezani Alison-Madueke, “in just one of the cases the EFCC is investigating involving her; about N23bn is alleged to have been embezzled. She is also involved in the Strategic Alliance Contracts of the NNPC, where the firms of Jide Omokore and Jide Aluko got oil blocks, but never paid government taxes and royalty. About $3bn was involved.

It said the release of the names of those undergoing trial as “confirmed looters” by the Federal Government was an indication that the government had taken over the functions of the judiciary.

Lots of reactions has trailed the first release abd now the new set of looters list released.
In his reaction, Fani-Kayode said the Federal Government was resorting to cheap blackmail because it could not secure his conviction in court.

The statement read: “It has been brought to my attention that my name was placed in what the Federal Government of Nigeria describes as its “looters list”.

“I wish to make it abundatly clear that this is nonsensical and utterly shameful and I hereby reiterate the fact that I am totally innocent of any wrongdoing.

“The fact of the matter is that no “looters list” is complete without the names of Muhammadu Buhari, Yemi Osinbajo, Rotimi Ameachi, Tunde Fashola, Bola Tinubu, Lai Mohammed, Adamu Abdullahi, Dambazau, Kayode Fayemi, Babachir Lawal, Maina, Maikanto Baru, Burutai, all APC Governors and other key members of the Buhari administration and the APC.

“The Federal Government claims that I “looted” 800,000,000 naira from government coffers. This is false.

“I did not receive and neither was I ever given one kobo by any government official, government agency or government parastatal during President Goodluck Jonathan’s tenure.

“The money that I received was given to me by the Director of Finance of the Jonathan Campaign Organisation, Mrs. Esther Nenadi Usman, before the election in 2015 and it was specifically for the conduct of the Presidential election.

“I was Director of Media and Publicity of the Campaign Organisation and it was used specifically and solely for the running and conducting of the media and publicity aspect of the election.

“The money she made available to me came from a private company account which was used to house contributions made to the Jonathan campaign by party supporters after a series of fundraising event.

“These were private funds and not public funds and neither can anyone expect us to have run an election in 2015 without any money. You do not run election campaigns with sand but with money.

“It is common knowledge that the Buhari campaign in 2015 was funded by moneys that can be traced directly to the state governments of Rivers state, Lagos state, Kano state, Ogun state and a number of other key APC states yet not one of those involved or that governed any of those states at the time have been questioned, arrested or prosecuted by the EFCC or the Federal Government.

“It is also common knowledge that President Buhari himself was offered and received several benefits and received money from the office of the former National Security Advisor, Col. Sambo Dasuki, yet nothing has been done about this.

“From the foregoing it is clear that the Buhari administration’s so-called war against corruption is selective and punitive and it is nothing but a vicious media trial and politically-motivated witchunt.

“It is nothing but a squalid and mafia-like attempt to muscle, discredit, demonise and sillence key members of the opposition. It is slanderous, malicious and unjust.

“If not for the fact that the Buhari administration is an irresponsible, weak, desperate and corrupt government that has no confidence in itself and no sense of decency how can they declare people that have not been convicted by any court of law as “looters”.

“Not only is this a violation of the constitutional provision that says that an accused person is deemed innocent until they are proved guilty by a duly constituted court of law but it is also highly prejudicial to the criminal cases that they are or may be facing.

“Apart from that it is a crude and sordid attempt to intimidate the judges and influence the outcome of the cases which are before them and also to compel them to give the judgement that the government wants. This is not only unacceptable but it is also shameful.

“It is a clear violation of the concept of separation of powers which gives the judiciary alone the power to determine the guilt or otherwise of an accused person.

“It is trite law that only a court of law can declare a man guilty or declare him a thief or a looter and not Buhari and his government.

“How can anyone get a fair trial in a country when the government has already pronounced them guilty before the world?

“You cannot be the investigator, accuser, prosecutor and judge in your own case. This is a basic principle of criminal and constitutional law which appears to have been lost on President Buhari and his cohorts.

“I don’t blame him: I blame Vice President Osinbajo who, as a Professor of Law and a learned SAN, should know better and who I am reliably informed is the co-ordinator of all these politically-motivated, baseless and malicious corruption cases which are being conducted against opposition members by the EFCC.

“He is the one that has been saddled with the shameless responsibility of manipulating the prosecutors, emboldening false witnesses, attempting to pressure the judges and attempting to send innocent men and women who are members of the opposition to jail.

“One day, whether he believes it or not, there will be a reckoning for his wickedness just as there will be one for Buhari and his entire government. God will see to that and He will judge and punish them.

“Meanwhile I reject the false label of “looter” and I hereby return it to sender.

“I also deny all the charges that have been levelled against me by the EFCC, I hereby restate my innocence and I shall continue to vigorously defend myself and my good family name in the court of law.

“I have no doubt that in the end my innocence will speak for me, God will vindicate me and He will expose my accusers for the heartless monsters that they really are.”