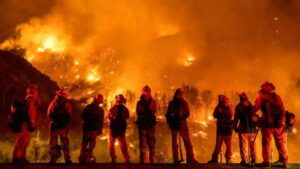 The US couple, whose gender reveal party last year was blamed for starting a deadly California wildfire face up to 20 years in prison.

The couple have pleaded not guilty.

Recall that the El Dorado fire, spread over more than 22,000 acres in San Bernardino County, southern California, destroying homes and other properties.

The California Department of Forestry and Fire Protection, known as Cal Fire, alleged that a “smoke-generating pyrotechnic device” used during a gender reveal party on 5 September was the cause of the blaze.

Firefighter Charles Morton was killed tackling the blaze and several other firefighters were seriously injured.