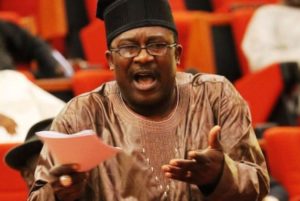 There was confusion on the floor of the Senate on Wednesday when the All Progressives Congress member representing Kogi West senatorial district, Senator Smart Adeyemi,  said he preferred military rule to the current democracy being practised in Nigeria.

His submission caused a stir in the Senate as his colleagues vehemently opposed his opinion, describing his statement as anti-democratic.

Adeyemi spoke while contributing to the debate on the bill for the establishment of a National Electoral Offences Commission, sponsored by Senator Abubakar Kyari.

Kyari had said the Independent National Electoral Commission was too overwhelmed to effectively prosecute election offenders, hence the need for a commission specifically for that purpose.

Other senators like James Manager and George Sekibo,  also disagreed with Adeyemi by insisting that democracy was better than  military government.

Adeyemi noted with anger that the way democracy was being practised in Nigeria,  particularly the electoral process,  was nothing but a charade.

He said, “To say without any fear of contradiction, there cannot be democracy in any nation where we do not have free and fair election.

“There will be misrepresentation, bad governance, misappropriation of funds and all the shortcomings that we have witnessed over the years of the democratic rule.

“As a result, people of questionable character find their ways to elective position.

“One can be tempted to say that military government is better than democratic government.”