Formenr Vice President, Atiku Abubakar broke down in tears on Friday as he received his presidential nomination form under the platform of the Peoples Democratic Party (PDP).

His supporters purchased the nomination form and presented it to him at the campaign office in Abuja, asking him to contest for the 2019 Presidential election. 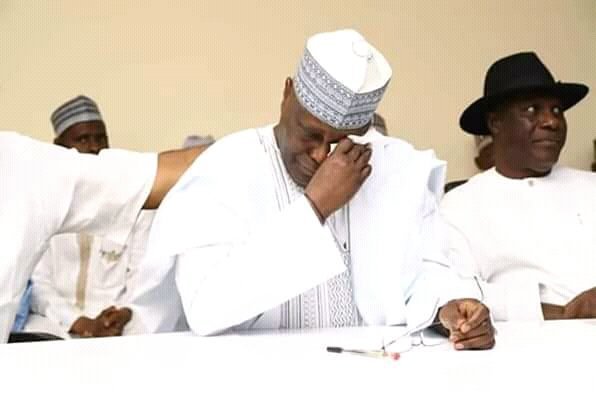 According to his supporters, the purchase of the form is an expression of their commitment to support his Presidential election bid.

The former VP broke down while responding and had to reach for his white handkerchief to wipe the tears from his face.

Atiku said he was surprised at the show of love from the group for coming together to purchase the form without his knowledge.

“You could have seen that one of the ladies who spoke virtually succeeded in getting me to weep. This is because she aptly described the challenges every Nigerian is facing in this country today and she believed honestly and sincerely from the bottom of her heart that I could be an instrument of addressing those challenges.

“Putting together such talented young Nigerians requires leadership and it is that leadership we have not been fortunate enough to have on a consistent basis, that has prevented this country from taking her rightful position in Africa and indeed, the world,” he said