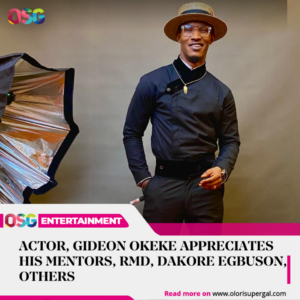 Nollywood actor, Gideon Okeke has taken to his Instagram page to pen down a lengthy appreciation message to his mentors, Richard Mofe Damijo, better known as RMD, Dakore Egbuson, and a host of others.

The Tinsel star, shared pictures of Dakore Egbuson and RMD and revealed that RMD has been his greatest influence and he saw himself through him. He also said he what attracted him to Dakore was the eloquence of spoken English.

Read his caption below;

“They’ve NEVER heard this before
But here’s a TRUE STORY.

2007 was the year I began My Professional Acting career. Before then, My biggest reference (and still till date) was RMD. He gave it everything that Panache required. And then I saw the movie “Critical Assignment” one evening in Uni.
I saw Myself a lot through RMD

Now let’s Flip to DAKORE.
Before My entry into Nollywood, I did notice something “worrisomely” peculiar.
Diction and Elocution were not part of the WhatsApp group lol. The Actors were delivering “labored lines of dialogue”, Like they had a morsel of Poundo in their mouths. But DAKORE spoke this English with so much fluidity…with ease. It rolled off her tongue like a damn great KISSER.

I believed I had a shot at this too. Cos I worried about how I would fit in. (Being a student of English Myself, it’s My most efficient means of communication lol). Now that there was a reference for Me within the fold, (somewhere not too far from My age bracket), I took ALL audition calls available.

Today, I’m My Own MAN! My own kind of ACTOR. I made it here! No surprises.

So I just wanna say 2 things :

In closing, May I say thank you :

“My RESPEK LARGE and this post is with ALL DUE RESPECT!!!