FG To Borrow $3bn Through Eurobonds in October

FG To Borrow $3bn Through Eurobonds in October 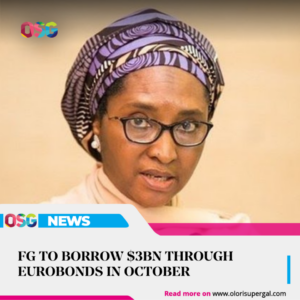 The Federal Government has revealed plans to raise $3bn from Eurobond sales in the second week of October 2021.

The Minister of Finance, Budget, and National Planning, Zainab Ahmed, disclosed this during an interview on Bloomberg TV. She said that the $3bn constituted half of the amount needed from external borrowings to fund the 2021 budget deficit.

She said, “We should be going to the market in the second week of October. The government has approved to raise $6.1bn from overseas. So we are looking at doing half of that in the Eurobond market and the other half from bilateral and multilateral sources. Depending on how the market goes, maybe we can do a little bit more.’’

Ahmed noted that the Federal Government was targeting single-digit inflation by 2023.

She also said the $3.3bn Special Drawing Rights from the International Monetary Fund had helped to boost the country’s external reserves and will help stabilise the naira.

She said, “We certainly feel we have passed the worst of it. Our projection is that inflation will continue to go down throughout 2021 and 2022. Our target is to get to single-digit inflation by 2023.”

“Also, the withdrawal by the central bank of funding to unauthorised dealers will increase supply to the formal market to meet demand.”

On the country’s debt, she said, ‘’The government is now working to reduce its debt-service burden by increasing revenue, restructuring its debt portfolio through the conversion of expensive short-term notes into longer tenors, and also reducing its overall borrowing.

“Our target is to triple revenues from about eight percent of the Gross Domestic Product to 15 percent, and also grow the economy by seven percent.”

Nollywood, Bollywood, Hollywood, Sports and so much ...