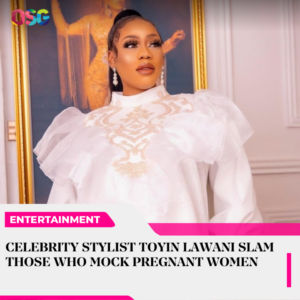 The 39-year-old who is an expectant mother, took to her Instagram page to share series of screenshots titled ‘7 Things A Pregnant Woman Really Hears When You Tell Her She’s Just Homonal’.

In her caption she wrote;

Let’s educate them abit about negative things to not say to pregnant women, main no no.

“Never talk about a pregnant woman’s hormones, swipe and read and digest, it simply means you are saying she’s crazy, out of line, delusional and her opinion doesn’t count, Etc,

“They tend to get tensed and worked up, but it’s never in a human beings place who has their right senses to say that to a woman grieving , trust me being pregnant can put you in an emotional state you can never imagine and when going through health issues too.

“It might seem like you are grieving atimes , like you have lost something, your body , your free will to do some certain things which you can do anymore , tend to stay away from people who tick you off , cause it’s like a time bomb waiting to explode and you might say and do the things you don’t want to.