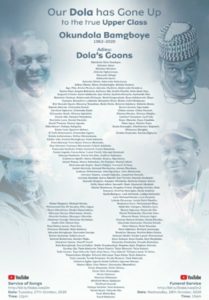 As noted by Scottish poet Thomas Campbell, “To live in the hearts we leave behind is not to die.” Undoubtedly, when we leave the face of the earth to rest beneath it, our voices, through deeds, continues to resonate through people in our lives. Campbell’s quote poignantly highlights this in the life led by the late Okundola Bamgboye, as one to be memorialised.

On the raucous Saturday of October 10, 2020, that saw protesters take to major streets of Lagos to protest police brutality at the hands of Special Anti-Robbery Squad (SARS), the sad news of Okundola Bamgboye’s demise from a long-standing illness was announced. The distressing news cataclysmically cast a cloud of gloom over his family, relatives, friends, and colleagues who fondly addressed him by the sobriquet Dola (Dollar, $).

The marketing and communications expert who bagged his bachelor’s and master’s degree in social science from reputable universities in London (Middlesex and Goldsmith respectively), had since worked in the capacity of marketing and sponsorship manager at telecommunications company, MTN Nigeria since 2003, after his return from the United Kingdom.

With his sudden departure came the realisation that he no longer would be seen each morning making his way up the elevator with a broad smile and his evergreen can-do spirit. It marked the last time anyone would hold a meaningful conversation with him; the last he would attend a board meeting providing ideas that will propel the visions of the organisation.

While his death translates to an enormous loss in various ramifications, his legacy yet keeps him animated in the hearts of those he came across during his lifetime. Tall, dark, with an incomparable charisma, friends and colleagues effortlessly sang loud of his warm, welcoming spirit in their tribute to him.

For one, his kind and altruistic nature was fondly remembered by close colleague Ifeoluwa Oyeyipo, manager, youth segment. Her testimonial of him was filled with fond memories of their time together. She recalled his kind mannered approach in dealing with others even when it may be overlooked as less impactful in their lives.

“Dola, ‘Baba Dee’, Dola… almost every car that drove by the Lekki toll gate had someone in it that called out your name as we stood by during the first MTN Season of Surprises, where we gave free access to cars. It was amazing how you laughed & joked with friends, acquaintances & strangers on that day and you said something like, ‘just make them happy, you never can tell if they’re having a bad day & how much impact you would have on them by just bringing a smile to their face.’”

Oyeyipo continued: “That was Dola, my darling Baba Dee, you made each person feel special & loved. You brought light, life & laughter everywhere you went. Your warm hugs, the forehead kisses, your words of wisdom were cherished by me and many others. Your death is a rude shock and a painful exit, it has made the world just lose some warmth & get darker. Yet a part of me hears your voice laughing & saying ‘Ife to le, weep not, I’m fine, I’m happy over here, it’s great to be here.’ I can imagine the Angels, together with Jesus & God all laughing right now, ‘cos [sic] Dola is sure cracking them up.”

For a man of his stature and position in a male dominated workplace, Dola doesn’t necessarily take advantage of privilege that comes with it. Instead of being proud and arrogant, he views life through a different lens: he approaches everyone around him as equals, understanding the vital role each person plays. To him, it is not about the strongest link, it is the proper management of the weakest link in the chain that helps attain set goals.

Oladapo Olawale, assistant manager, masterbrand attests of his humble ways. In his tribute he specifically pointed out this virtue.

“This is a man you’d have loved to continue being friends with through his 60s, 70s and beyond. You just pictured the future with a Dola in it and you looked forward to those moments. There was never a dull moment in any atmosphere he breathed. He related with presidents, governors and everyone else just the same way regardless.” he said.

He added: “He was never a different person from meeting rooms, to his desk, to events and even presidential villas. What a man… his love for his family and devotion to it was everything. I still remember our last convo [sic] on the phone that went on for about 30mins, less than 24hrs before you slept the last. You said you had just 18 months left and this is some project you’d like to leave a legacy, another mark with. Still looking at our last chat on September 27. Even on the Sunday you chatted me up to look at a document you shared, you said you were in Port Harcourt City (PHC) for a funeral.

“So when I got a message from a friend, at a brother’s wedding yesterday, asking if it was true [that] Dola was no more, I thought it was a rude joke. And then a call, and another call got me uneasy. I went out to call back and couldn’t go back in again. He had all the effects to make him a Nigerian full of himself, but he was more down to earth than anyone I’ve ever met. I’ve seen him give his ATM card and password to more than one person in my presence and I was in utter shock, and he didn’t even whisper the four-digit number. That’s the kind of trust he had. The innocence of a child. This remains unbelievable, but once again, reminds us just how fickle life is. 2020 has been too much of a traumatic year and I just hope it’s done. The ‘Dollar’ has crashed and left a lesson on how life should be lived – live it & love it because it’s a gift you may never have back. RIP my dearest friend, brother and confidant… Still hurts.”

Whether it be in the workplace, social setting, or just a moment with a close friend, Dola shows he understands what the other party is going through, especially during tough times. His empathetic/sympathetic nature has helped him relate on a personal level with most of his colleagues. Case in point, when Dola consoled Shadrach Akano a core products analyst, at a time of great loss.

“Dola’s passage is truly heart-wrenching for many of us.” Akano said expressing his loss of his dear friend and colleague. “I remember in January 2018 when I lost a friend who passed in his sleep and was in the rest room sobbing. Then, Dola just barged-in, in his usual way, we greeted and Dola connected to my mood. He asked if I was fine and I told him about what happened to the friend. After sympathizing, Dola would say ‘Aburo, see my prayer is when I will die, I prefer to sleep and not wake up rather than being taken from one hospital to another.’ It was shocking for me as a young guy. And when the news broke, I took solace in God and remembered his words. He is in a better place and smiling at every one of us. Rest in peace baba D! I love you, sir.” Akano concluded.

For Joseph Endy Ogbuka, assistant manager, youth segment, it was Dola’s dependability that drew them close to each other

“Dee for ‘Dollar’”, Ogbuka fondly said repeating the phrase as many times as he could. Dola in a calm voice would often respond, “You can call my name, call my name, but don’t wear it out.”

“Ahhh, words fail me so! My dear friend and brother has left us so… Peacefully he lived, his departure, just as so… a star has fallen, if you know, you know so… Our relationship was indeed special, and so was everyone else’s testimonial. He found a unique way to relate with every individual from the high to the lower class; connecting was normal. I remember some of our Kodak moments. I remember how we’d drive around just to seize the moment. Every moment with him was such a golden moment. With ‘Dollar’, there was never, ever a dull moment. His family, to him, was like a taste of fresh wine. T’was sweet to hear him count his blessings from the grapevine.

“He always told us about them to inspire us to tow the same line because he understood that family was above all divine. Oh, ‘Dollar’! I wish you stayed back for mankind. I wish my tears could bring you back beyond my mind There’ll never be another ‘Dollar’, you were one of a kind A rare gem; another, who could find? He never looked like someone who could pass away. His death is a reminder that eternity is just a tick away. Live your life fully, but live ready, day by day, because no man knows when the Almighty will take us away. I’ll miss you big bro, this is a hard one to chew. But I’ll keep strong, hoping one day again to meet you. We’ll keep your flag flying.” Ogbuka concluded.

Just like he is committed to his work life to attain endless possibilities, outside that, Dola has a social life, and a vibrant one at that. Filled with exuberance, he is easily the life of any gathering.

A close friend, Funso Aina,  Senior Manager, External Relations, tags Dola an ‘incurable optimist’, and further proceeds describing him as a larger than life humanist. In his eulogy, Aina acknowledges that Dola’s absence created a vacuum, one that cannot be easily filled.

GOODNIGHT… Guardian of Our Cool

A tough 24 hours this has been, and an entire generation is still struggling to process our loss.

You need to understand something: this guy right here, harboured the youth and history of an entire generation.

You need to understand, that while many rushed to become adults, to brag about growing up, to leave confined to memory all that which illustrated and possibly explained our ‘growing up years…’ this guy right here stored and represented it all.

When our kids wonder and ask if we were ever Cool, we simply point over there… “Who? Uncle $?” They would ask. Yes, Uncle $.

Dola was there. He was Us! To the end, he showed what we were, who we were and how we were.

He was the ‘Guardian of Our Cool’.

No Surprises [for] the outpouring of love, cries and prayers, because each one of us who grew up with him, knew him, or simply came across him in this journey called life, has something special and memorable about our times with him.

Were we ever Cool? Hell yeah! It may not seem so, as we turn old and grey and pretend to be grown up, but just take a look back at OKUNDOLA AGBOOLA BAMGBOYE … he is our History. The History of Our Cool.

God bless & keep you brethren… until the next Urban Disturbance.

I am betting Our darling black star is prepping your welcome party!

Although gone now, Adewolu Adene still is in awe of Dola’s uncomplicated approach to life:

“[It is] amazing how there are so many videos of Dola lighting up a room with his love of life and people.” Adene reminisced.

He continued: “An awesome gentleman who also knew his way around the streets – a people person. He never took himself or life too seriously. I was always blown away by his warmth towards the ladies at the front desk and the security folk. Dola knew their names, and boy did they love him back. what a guy. May God grant him eternal rest.”

He leaves behind at the age of 58 a lovely wife (Ochee), a son (Bidemi), and two daughters (Ayoade and Ayodola).

No doubt a tragic loss. However, the legacy he leaves behind is inextinguishable. The memories, priceless.