EndSARS: UN Calls For End To Attacks, Violence On Protesters 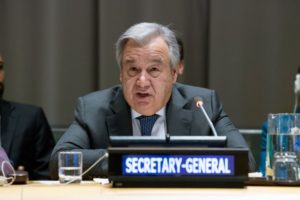 The United Nations Secretary-General, António Guterres on Wednesday has called on the Nigerian police to end the brutality of killing innocent citizens.

The UN secretary has condemn the killing of peaceful activist who are demanding their rights from the government.

Guterres in a statement on Wednesday also expressed his condolences to the bereaved families and wished a speedy recovery to those injured.

He further called on the authorities to investigate and bring perpetrators to book.

The statement read, “The Secretary-General is following recent developments in Nigeria and calls for an end to reported police brutality and abuses.

“He condemns the violent escalation on October 20 in Lagos which resulted in multiple deaths and caused many injuries.

“If Buhari Does Not Address Us Today, ...