Ondo2020: Akeredolu Announced As Winner Of Governorship Election By INEC 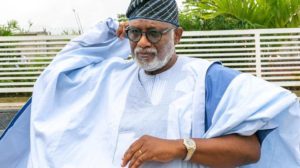 Incumbent Ondo State governor, Governor Rotimi Akeredolu has secured another term after being declared as the winner of Saturday’s election by the Independent National Electoral Election (INEC).

Official results from the INEC showed that Akeredolu and his All Progressives Congress (APC) had 292,830 whiles his closest rival, Eyitayo Jegede who is the candidate of the Peoples Democratic Party (PDP) who had 195,791 of the total votes.

The declaration of the election was done by Professor Idowu Olayinka who is the vice-chancellor of the University of Ibadan.

He served as the returning officer of the election.

EndSARS: Five Things To Know About The ...