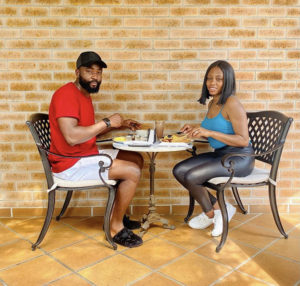 The two former Big Brother Naija housemates are said to have married secretly after Khafi was spotted wearing a ring. And it looks like she has confirmed the reports on Twitter.

She posted a picture on Twitter with the caption: ‘Somebody’s wife’.

Khafi and Gedoni met during the Big Brother season 4 reality TV show and got engaged in December 2019.