“Jerusalema” Becomes The Most Shazamed Song In The World 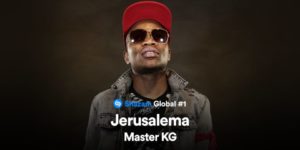 “Jerusalema” by South African singer and DJ, Kgaogelo Moagi Master KG has been announced as the most Shazamed song in the world by the Apple-owned music and movie discovery application, Shazam.

Shazam congratulated the South African superstar for the great feat in a social media post on their official Twitter page.

“Congrats @masterkgsa! #Jerusalema is now the most Shazamed song in the world …”

Congrats @MasterKGsa! #Jerusalema is now the most Shazamed song in the world ? pic.twitter.com/S4pae4sV5N

Shazam, an application that can identify music, movies, advertising, and television shows, based on a short sample played and using the microphone on the device, on Tuesday announced that Master KG’s Jerusalema was the most searched song on the platform all over the world.

The song, which premiered on YouTube in December 2019, quickly grew to become a favourite of many and has garnered over 124million views so far. Sang by South African DJ and record producer Master KG featuring Nomcebo, Jerusalema received such an immense reception online that it was later included on Master KG’s second album that was released in January 2020. It then went viral during the lockdown period leading to the #JerusalemaChallenge that incorporated various moves and trended on various social media platforms.