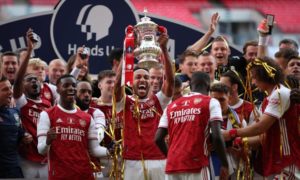 Arsenal have won the FA Cup for the 14th time after beating London rivals Chelsea 2-1 in this season’s final played on Saturday at Wembley Stadium.

Arsenal captain Pierre-Emerick Aubameyang was the unsung hero as the Gunners rallied from behind to secure the victory after Chelsea had made a bright start to the match.

Chelsea took the lead inside five minutes through Christian Pulisic’s smart finish. But Aubameyang  drew Arsenal level from the penalty spot before the break after he was fouled by Chelsea captain Cesar Azpilicueta.

The Gabon international then produced a moment of world-class finishing to make the defining contribution to the first behind-closed-doors FA Cup final.

Chelsea finished the game with 10 men as midfielder Matteo Kovacic was very harshly sent off for a second yellow card.

By virtue of the win, Arsenal, who finished 8th in the Premier League will play in Europa League next season.