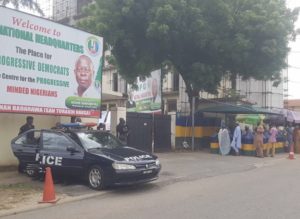 The Inspector-General of Police, Mohammed Adamu has ordered that the National Secretariat of the All Progressives Congress be closed due to the ongoing crisis in the party. It was reported that members of the National Working Committee were prevented from gaining access to the secretariat.

Roads and Airports to Reopen After Meeting ...