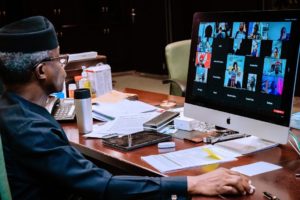 The Vice-president of Nigeria, Professor Yemi Osinbajo held a virtual meeting with the National Human Rights Commission on Rape where rape and gender based violence were discussed. The Vice President said this on his Twitter page and he also mentioned that he would continue to work with all actors in order to detect and punish the perpetrators of these sickening acts and also to prevent a re-occurence.

The Vice-president has also promised to continue to use the platform of the National Economic Council to encourage states who are yet to domesticate the Violence Against Persons Prohibition Act, 2015 and the Child Rights Act, 2003.