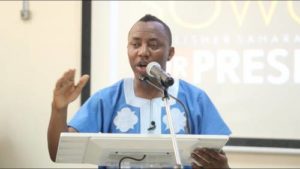 Rights activist and journalist, Omoyele Sowore, has told the Nigerian Senate that the proposed anti-social media bill was a “fatal accident and dead on arrival”.

The bill, which was widely condemned and rejected by Nigerians, was introduced by Senator Muhammed Musa Sani on November 5, 2019 to criminalise the use of the social media in criticising government and persons holding political offices.

Sowore made the comments while delivering a presentation before the Senate Committee on Judiciary, Human Rights and Legal Matters during the public hearing of the bill on Monday.

The activist described the bill as crude and outdated, noting that lawmakers should have dissipated energy on how to fix the constitution through referendum.

He said, “The Nigerian Government is the biggest purveyor of fake news. It is categorically false for government to be telling us that economy is working when we know it is not working.

“The final thing I want to say is that this bill is dead.”

Speaking further, Sowore said that SaharaReporters was the first news platform to break the news that former President, Umar Musa Yar’adua, was terminally ill but it was described as false.

He noted that if the bill had been passed at that time, he would have been in jail for allegedly spreading fake information.

Sowore said the bill was aimed at protecting only those in power but not the masses.

He said the system was working in Singapore where the plagiarised bill emanated and cannot be forced on Nigerians.

Civil society organisations and activists, who spoke at the event, asked the Senate to withdraw and trash the bill.

They said the bill would infringe on the rights of Nigerians.

Some of the groups, which kicked against the bill, include Amnesty International, International Press Council, Center for Democracy and Development, Nigerian Union of Journalists, Policy and Legal Advocacy Centre, among several others.