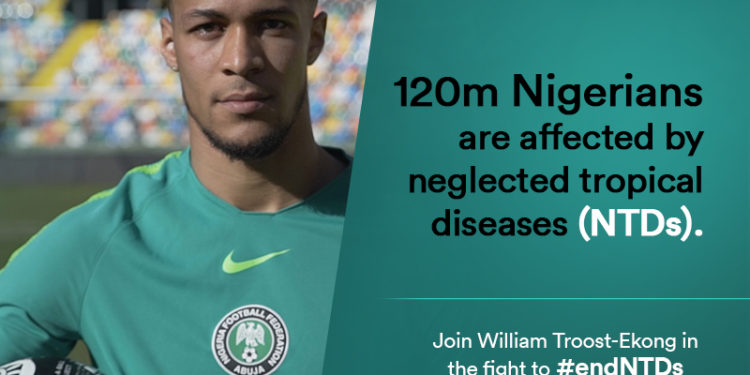 Nigeria national team defender William Ekong has started a campaign to draw attention to neglected tropical diseases (NTDs) that affect more than 120 million Nigerians. In partnership with the END Fund and Common Goal, William appears in a 48 seconds public service announcement where he calls on affected Nigerians to seek free treatment. 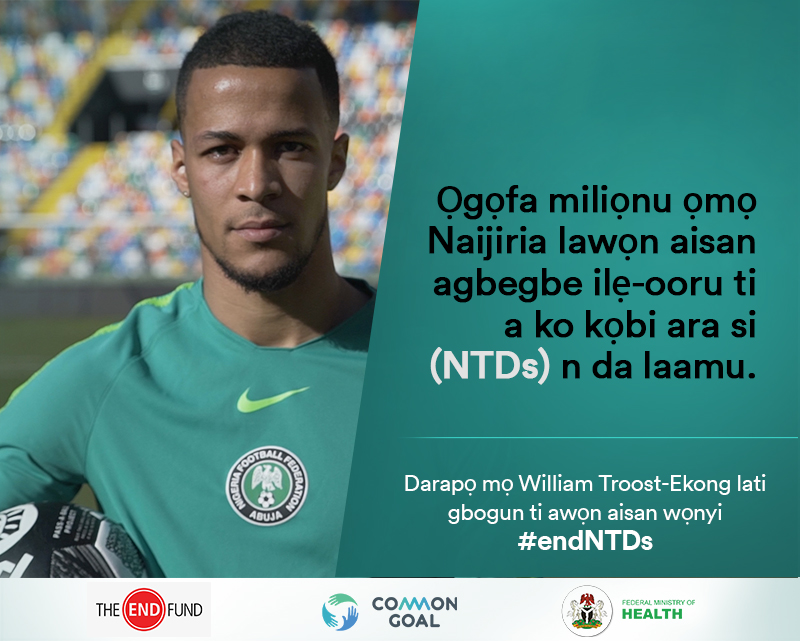 Neglected tropical diseases are a group of parasitic and bacterial infectious diseases that affect more than 1.5 billion of the world’s most impoverished people, including 869 million children. They include intestinal worms, schistosomiasis (bilharzia), river blindness, trachoma, and lymphatic filariasis.

Preparing to represent the Super Eagles at the 2019 Africa Cup of Nations in Egypt, William is hoping that every Nigerian will participate in the free treatment campaigns from several END Fund partners across the country.

“Like the rest of the team, I joined Common Goal because I wanted to use football as a tool to make a difference. I’m proud that we’re partnering with the END Fund to challenge every Nigerian to tackle neglected tropical diseases or NTDs,” said William. 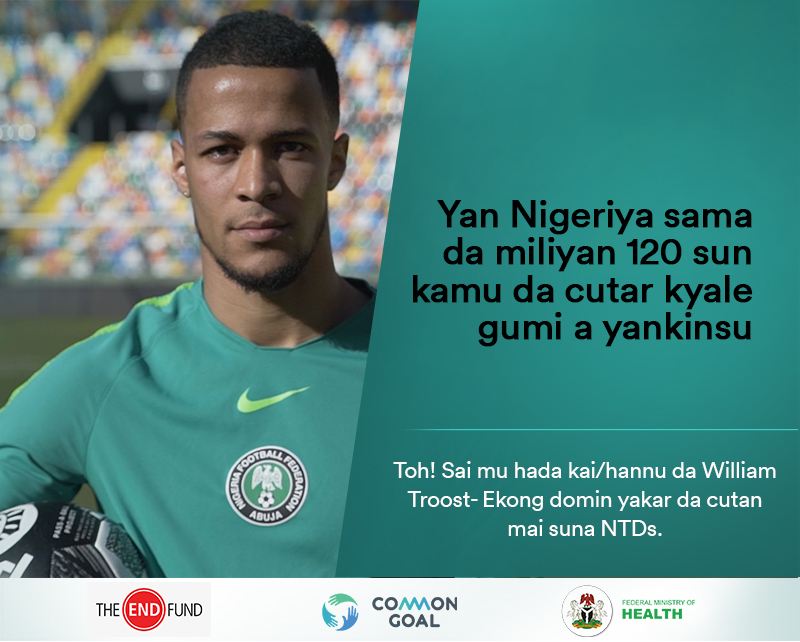 “600 million people in Africa need treatment for these diseases with over 120 million living in Nigeria alone.

“Football is a powerful force in Nigeria and as a footballer and parent, I believe we should do everything we can to end these preventable and treatable diseases that stand between you and your goals.

‘So the next time a health worker comes to your school, community or place of worship make sure you take the free medicine that they are giving out. Keep the ball rolling – spread the word to your family and friends and let’s be the generation to beat NTDs,” he concluded. 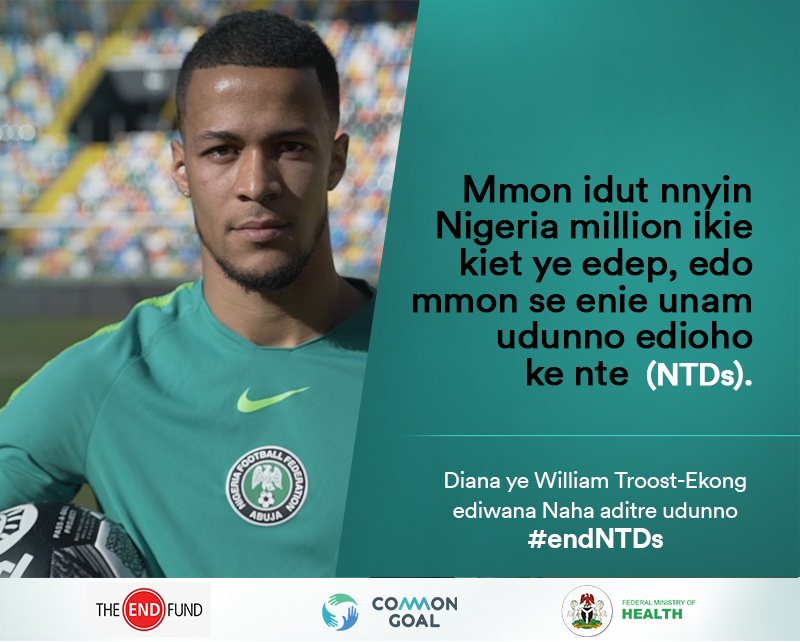 Dr. Chukwuma Anyaike, Director and National Coordinator of the Neglected Tropical Diseases Elimination Programme, Federal Ministry of Health Nigeria, described the campaign as an important opportunity to bring attention to NTDs in the country.

“We are very delighted to have William join the Federal Ministry of Health and our partners in Nigeria’s fight against neglected tropical diseases, we hope that this campaign helps to highlight the importance of the fight against NTDs in Nigeria and across the continent,” Dr. Anyaike said.

The campaign will run on local radio and television stations during the months of June and July across the following states: Ekiti, Ondo, Osun, Gombe, Akwa Ibom, Bauchi and Abuja, the Federal Capital Territory. It will also feature on digital platforms nationwide as well and include targeted SMS messaging.

ABOUT THE END FUND

The END Fund is the only private philanthropic initiative solely dedicated to ending the five most common neglected tropical diseases (NTDs), which affect more than 1.5 billion people globally. It efficiently puts private capital to work, advocating for NTD programs that are innovative, integrated, and cost-effective. It facilitates strong partnerships with the private sector and has supported disease control programs in 30 countries.

Since its founding in 2012 through 2018, with its partners, the END Fund has provided over 720 million treatments for NTDs with a value of over $1.3 billion. In 2018 alone, the END Fund reached almost 134 million people with more than 220 million NTD treatments, which represents an almost ten-fold increase from 2012.

Common Goal is a global movement that aims to unite the entire world of football behind a shared mission to transform the world for the better. With a simple pledge, members give 1% of what they earn from the game to organisations using football as a tool to tackle some of the world’s most pressing social issues. 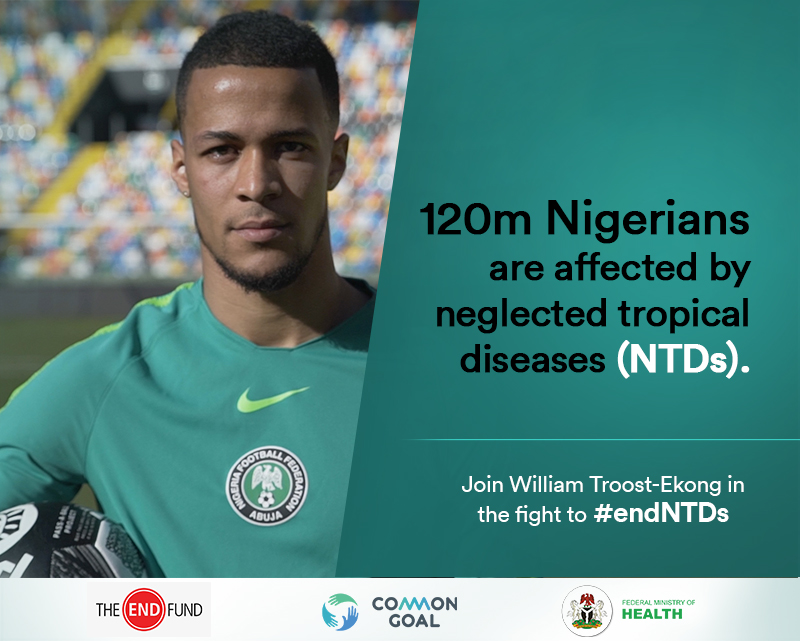