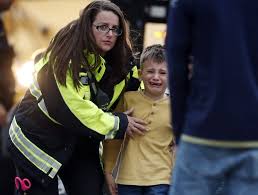 1 Dead 8 injured after two pupils allegedly opened fire in a US school.

The attackers,” walked into the STEM school, got deep inside the school and engaged students in two separate Location”, Douglas County Sheriff Tony Spurlock said.

One suspect was a male youth, while the other was an adult man. both were pupils at the school.

Mr Spurlock said the school contacted the emergency services “almost immediately”, and that officers arrived at the scene about two minutes later.

The school was closed and placed on lockdown as police attended the scene. It was eventually lifted an hour later, at about 15:00 local time (21:00 GMT).

One 18-year-old male pupil was fatally shot. A handgun was later recovered at the scene.