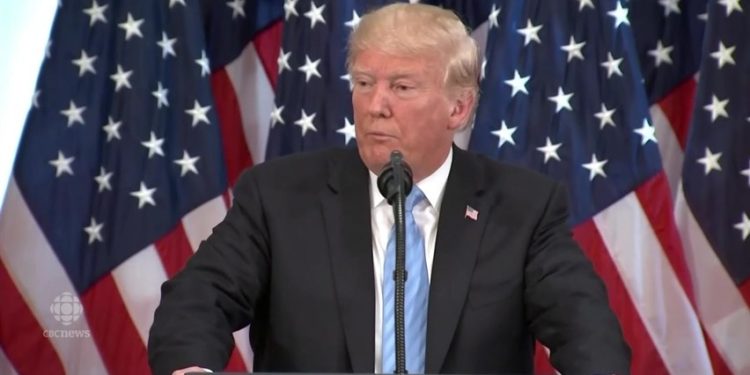 Donald Trump has declared a national emergency to bypass congress to pursue building of a wall on the US-Mexico border.

At an incoherent press conference, the President said he had no choice but to declare a national emergency in a bid to stop illegal immigrants coming into the country.

He said he was invoking the  National Emergencies Act of 1976 which gave presidents the power to declare an emergency.

“There’s rarely been a problem,” he said. “Nobody cares. I guess they weren’t very exciting. But nobody cares. They sign it for far less important things in some cases, in many cases.”

His predecessors, Bill Clinton, George W Bush and Barack Obama all declared national emergencies, but for issues that emerged overseas. Trump, in a bid to show the “crisis” in the border was expedient brought out two women who held up photos of their loved ones who were allegedly killed by immigrants who came through the border.

He also bragged about receiving money for the wall from Congress when he was not expected to receive any, but declined because he wanted to build the wall faster.

“I don’t have to do it for the election. I’ve already done a lot of wall for the election: 2020. And the only reason we’re up here talking about this is because of the election, because they want to try and win an election which is looks like they’re not going to be able to do.”

In a reply, Democratic House Speaker Nancy Pelosi tweeted: “He admits it’s a FakeTrumpEmergency. Hear him say it: “I didn’t need to do this, but I’d rather do it much faster.”

The admission could prove to be a costly mistake from the President, if as expected, the declaration is challenged in court by states and others who stand to lose federal money.

2019 Elections: Atiku Reveals What He Discussed ...