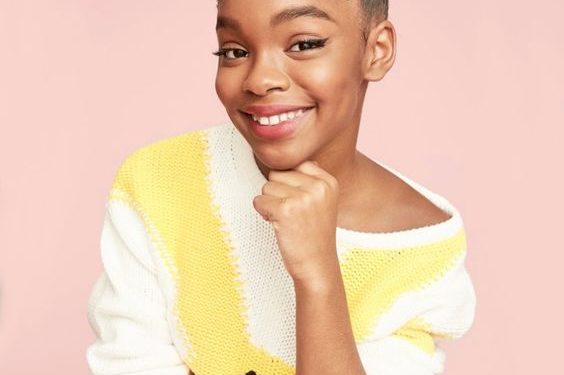 When the comedy Little hits theaters soon, aside from featuring some of the industry’s biggest stars, the film will also make history. For at least a few months, 14-year-old Marsai Martin will hold the title as the youngest executive producer of a major Hollywood motion picture in history.

Martin will co-star with Regina Hall in the singular role of Jordan Sanders, a take-no-prisoners tech entrepreneur who wakes up to discover that a random act of black girl magic has transformed her into the 13-year-old version of herself.

Aside from starring in the film and making everyone, including this writer, wonder what the hell we’ve been doing with our lives, Martin will also serve as the executive producer of the irreverent body-switch comedy. The Black-ishstar had the idea for the film when she was 10 years old after falling in love with the Tom Hanks film, Big. She ended up pitching the idea to Black-ishExecutive Producer Kenya Barris when she was only 10 years old.

“It was one of my most favorite films growing up,” Martin told The Root. “After the Season 1 finale of Black-ish, we told Kenya Barris about it, and he called Will [Packer] and said: ‘Yo, you know the girl who plays Diane on Black-ish? She has this dope idea!’”

Packer, the blockbuster producer of hits like Ride Along and Girls Trip, says he immediately bought the idea but was astounded at Martin’s maturity, noting that she pitched the idea to the studio.

Not simply resting on its theme of black girl magic, Little is also powered by some of Hollywood’s most talented and recognizable black women. Regina Hall also serves as one of the film’s executive producers, and Issa Rae, star of HBO’s runaway hit Insecure, co-stars as Jordan’s long-suffering assistant, April, who is the only one who knows her boss is trapped in the body of a middle-schooler.

Tina Gordon, who wrote the classic black films Drumline and ATL, directed Little. Gordon also co-wrote the screenplay with Tracy Oliver and hopes to add her name to Hollywood’s too-short list of black female directors. As noted in a recent study, since 2007, only 5 of the top 100 grossing films were directed by black women—and two were directed by Ava DuVernay.

Marsai’s record-setting accomplishment may only stand for a short while in the history books, as 13-year-old Millie Bobby Brown is set to become the youngest person to produce a major Hollywood film. Although I had no clue that Millie Jackson even had a child with the King of R&B, superstar Bobby Brown, it must be noted that… (Editor’s note: No, Michael. That’s not how any of this works.)

Wait. I’m being told that I may have some bad information on Millie Bobby Brown, which is good because it wouldn’t be fair for her to steal Marsai Martin’s record and enjoy her reign as the princess of R&B.

While Marsai never mentioned the historical significance of her achievement during our interview, she did add that she is not only proud of the movie but also hopes it will inspire others.

“It doesn’t matter if you are four or 84, there’s no limit to what you can do,” Marsai told The Root. “And if you prove that you can do it, you don’t have to wait… A 13-year-old created this film and it turned out to be a wonderful, loving and fulfilling film.”

Watch the trailer for Little below.

Watch the only cypher that matters, brought ...