Most of us remember the iconic cartoon that is LionKing, it is 1994 American epic animated musical fantasy film produced by Walt Disney Feature Animation and released by Walt Disney Pictures.

Disney gave us a peek behind the curtain with a short trailer of the remake. The all-star cast includes James Earl Jones as Mufasa, Donald Glover as Simba, Beyonce’ as Nala and Seth Rogan as Pumbaa, according to imdb.com. Chiwetel Ejiofor, John Oliver and other big-name stars are also in the movie, which is directed by Jon Favreau.

The movie is scheduled to be released in summer of 2019. The remake will “employ CGI-like technology to create live action, opposed to traditional animation, which was used in the original in 1994,” according to ABC Action News. That version earned nearly $1 billion, ABC reported. View trailer below –

Who is excited for the new #LionKing movie coming out in 2019?
.
.#OSG#Olorisupergal pic.twitter.com/Oy6BZBvaCX

The internet went berserk at the release of the trailer, here are some reactions below –

I woke the best news ever , Disney released a trailer for a live adaptation of The Lion King ???#TheLionKing

Here is the cast of ‘The Lion King’ and who they will be voicing in the movie. #TheLionKing pic.twitter.com/4gQzQLYN0M

This movie is going to be full of sobbing 20 and 30 year olds. #TheLionKing pic.twitter.com/lPuZCKe7Gr

#Disney‘s #TheLionKing Teaser is so Nostalgic and Outstanding.
My heart was beating so much while watching, it is so Thrilling.
with great Voice Cast and #JonFavreau as Director. #LionKing Remake is gonna the Best Ever.
I have got so Excited. pic.twitter.com/zUdpqwomPz

The movie is definitely star-packed – 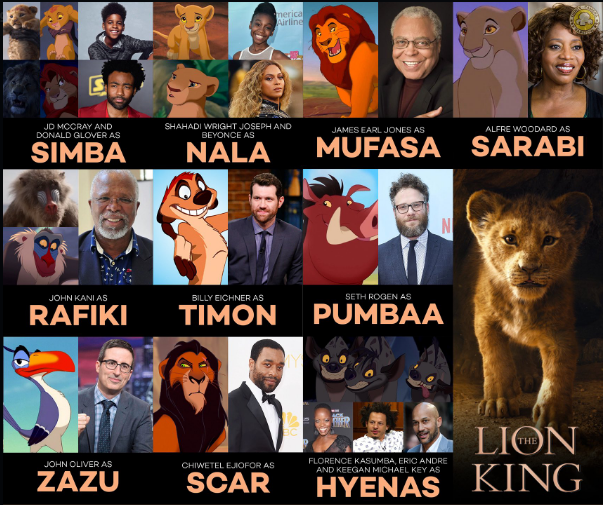