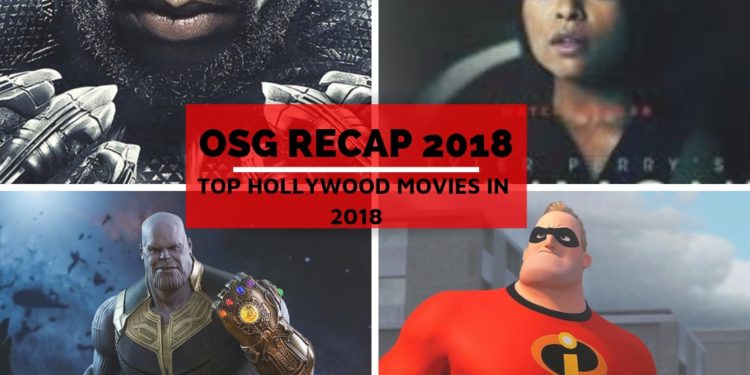 This year has indeed been a phenomenal year with blockbuster movies that had caused a stir both online and at social gatherings.
Below is a list of some of the top  Hollywood movies in 2018 that has smashed box office.
These movies had left us wondering and brought about conversations like how overrated and underrated it was.
From the beginning of this year till present these movies have still been on the lips of people.

In Black Panther, T’Challa is crowned king of Wakanda following his father’s death, but his sovereignty is challenged by an adversary who plans to abandon the country’s isolationist policies and begin a global revolution.

“Black Panther” follows T’Challa who, after the events of “Captain America: Civil War,” returns home to the isolated, technologically advanced African nation of Wakanda to take his place as King. However, when an old enemy reappears on the radar, T’Challa’s mettle as King and Black Panther is tested when he is drawn into a conflict that puts the entire fate of Wakanda and the world at risk.
Black Panther was released January 29th, 2018 with a budget of $200-210 million and had over $1.347 billion.

Acrimony is an American psychological thriller produced, written and directed by Tyler Perry under the production of Lionsgate. The movie had stars like Taraji P Henson, Lyriq Bent, Jazmyn Simon, Crystle Stewart, and several others and was released March 30th, 2018.
Acrimony is a psychological thriller that tells the story of a loyal and hardworking wife who supports her husband’s dream of launching his invention “Gayle force” however their marriage crashed just before he made his big hit with his rechargeable battery invention that landed him a fortune of a lifetime.
All hell broke loose when after he had offered his ex-wife Melinda some money for all the sacrifices she had made, but she wanted more and discovered he was already engaged to the same lady that he cheated with while they were in college which enraged her and made her drove into their trailer house that leads to her having hysterectomy.
She became obsessed with her ex-husband and his fiancé and was mad at her family for leading her astray. She was angry that her ex-husband’s current wife is living the life she was meant to live.
She sued the couple, disfigured their photos, stalked them on the internet. The couple who file a countersuit against her and her threats and obtain restraining orders.
After several attempts them and exact revenge, Melinda drowned while trying to kill her ex-husband during their honeymoon cruise.
The question now is who is to blame?

The movie budget was $20 million and made $46.4 million at the box office

In the movie, the Avengers and the Guardian of the Galaxy attempt to stop Thanos from stealing the six infinity stones to create a so-called balance which will lead to the destruction of most of the earth.
The Avengers: Infinity wars was released April 27, 2018, and had a budget of $316-400 million and had a box office of $2.047 billion.

Oceans eight is an American heist comedy film, a continuation and a spinoff from Steven Soderbergh’s Ocean’s trilogy, directed by Gary Ross and written by Ross and Olivia Milch.
The movie was released June 5, 2018, distributed by Warner Bros. with a budget of $70 million and made $296.9 million at the box office.
The movie had casts like Sandra Bullock, Cate Blanchett, Rihanna, Anne Hathaway, Mindy Kaling, Helena Bingham Carter, and several others.
Oceans eight follows a group of women led by Debbie ocean, who just got out of jail and also the sister of Danny Ocean, had a plan to the robbery at the annual Met Gala in New York City while serving her sentence.
Debbie assembled the rest of the team, a fashion designer, a jewelry maker, computer hacker, a street hustler and pickpocket and a profiteer who secretly sells stolen goods.
Their plan was to steal the Toussaint, a $150 million Cartier necklace from the Met Gala using a famous actress Daphne Kluger without her knowing their end game, everything was well planned making Daphne Kluger choose Weil as her stylist, one of the team to make them have access. The original was stolen and replaced with the fake.
The plan was executed successfully and each of the team members went their separate ways with their cut and started up their several lives.
Meanwhile, Debbie framed Becker for stealing the necklace after she implanted some piece of the original necklace on him during the Met Gala, to get back at him for making her go to jail.

Incredibles 2 is an American computer-animated superhero film produced by Pixar Animation Studios and was distributed by Walt Disney Pictures and was released June 15th, 2018.
The movie was a sequel to The Incredibles 2004 and was written and directed by Brad Bird.
The movie follows the story of the Parr family as they try to restore public’s trust in superheroes while balancing their family life, only to combat with a new foe who seeks to turn the populace against all other superheroes.
Incredible 2 stars amazing actors like Samuel L. Jackson, Craig T. Nelson, Holly Hunter, Sarah Vowell, Huckleberry Milner and others.
The budget of the movie was $200 million and made $1.239 billion at the box office.

The Equalizer 2 is an American thriller film and the sequel to The Equalizer which was released in 2014. Directed by Antoine Fuqua, had stars like Denzel Washington, Pedro Pascal, Aston Sanders, Melissa Leo, and Bill Pullman.
The movie had quite a number of producers, Todd Black, Jason Blumenthal, Denzel Washington and a host of others and was distributed by Sony Pictures.
The Equalizer 2 follows the story of a retired United States Marine and ex-DIA agent, Robert McCall as he sets out on a path of revenge after one of his friends was killed.
He was a lyft driver and helps less fortunate with the help of his friend Susan Plummer, he tried to reconnect Sam and his long lost sister, he was also trying to uncover the mystery Susan was working on before her murder and looking for her murderers.

Crazy Rich Asians is an American romantic comedy-drama with Asians casts, directed by Jon M. Chu and was based on the 2013 novel of the same name by Kevin Kwan.
The film stars Constance Wu, Henry Golding, Gemma Chan, Lisa Lu, Nico Santos, and Michelle Yeoh.
Directed by Jon M. Chu and produced by Nina Jacobson, Brad Simpson, and John Penotti.
The Budget for the movie was $30 million and made over $236 million.

The movie follows an American professor Rachel Wu who had been dating Nick young, a dashing young man. Young invited her to Singapore to attend his best friends wedding of which he was the best man and also to meet his family.
Chu had no idea what she was getting her self into as she thought it was a normal trip.
However, she later discovered that her boyfriend Young is an heir apparent of the Young dynasty, a fabulously rich and influential family in Singapore.

The budget of the movie was $178 million and made $791 million at the box office.

The movie follows Ethan Hunt and his team who must track down stolen plutonium while being monitored by a CIA agent Cavil after a mission goes awry.
Ethan Hunt had successfully captured Solomon Lane, the remnants of the Syndicate have reformed into another organization called the Apostles. Under the leadership of a mysterious fundamentalist known only as John Lark, the organization is planning on acquiring three plutonium cores. Ethan and his team are sent to Berlin to intercept them, but the mission fails when Ethan saves Luther and the Apostles escape with the plutonium. With CIA agent August Walker joining the team, Ethan and his allies must now find the plutonium cores before it’s too late.

Seven facts about the Prince of Wales.