Indonesia plane crash into the sea with 189 aboard. 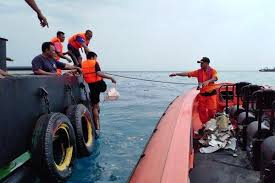 An Indonesian passenger plane carrying 189 people, including one child and two infants, has crashed into the sea close to the capital Jakarta, several minutes after takeoff.

The Lion Air flight JT 610 was carrying 181 passengers, as well as six crew members and two pilots, when it disappeared from radar during a short flight from Jakarta to Pangkal Pinang on Monday morning, according to Indonesia’s National Search and Rescue Agency (SAR).
The plane, a new Boeing 737 MAX 8, took off from Soekarno-Hatta International Airport in Tangerang, Greater Jakarta at 6.21 a.m local time and was supposed to land at around 7:30 a.m.

So far, no survivor has been found and it has been unclear what led to the crash.

Davido expresses joy as he sells out ...

Best Halloween costumes on the internet so ...