Suspected Kidnapper Who Allegedly Overdosed On Tramadol Has Died

The suspected kidnapper who has been unconscious for 9 days after he allegedly overdosed on Tramadol has died.

The suspect was caught sleeping after in Owo, Ondo State, after a botched kidnap attempt. Authorities believe his sleep was induced by a high intake of Tramadol. 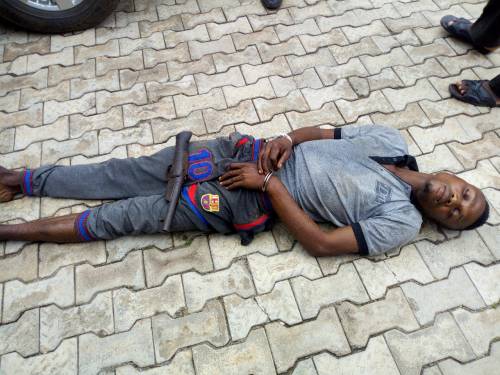 The suspect, with some others, now at large, had stormed Chinery Pharmacy in Owo, in a bid to kidnap the owner who escaped through a back door on seeing them.

While others escaped, the suspect fell and was arrested. One locally-made gun and 400mg of Tramadol was recovered from him.

The Ondo State Police spokesperson, Femi Joseph, has now revealed the suspect, who had been unconscious since then has now died.

Joseph said the suspect died at Owo General Hospital where medical personnel tried their best to revive him to no avail.

“The suspect died nine days after we arrested him; we thought he would be revived so that he could help us in our investigation. Unfortunately, he died yesterday (Monday).

“This could be connected with the high intake of tramadol which he took.

“We are using this opportunity to further educate the public, especially parents, to monitor their wards and the kind of company they keep,” he said.