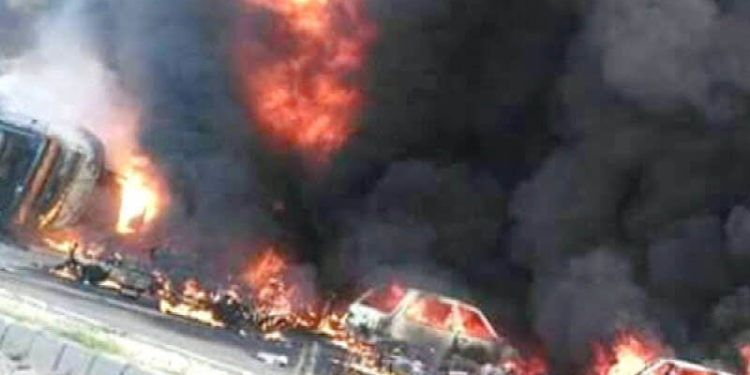 Nine people have been confirmed dead and 54 vehicles burnt in the Lagos Fire yesterday evening.

The Fire broke out around 5pm, Thursday Evening when a tanker spilled its content on the road and engulfed into flames, which ignited other vehicles on the road.

Adeshina Tiamiyu, the General Manager, LASEMA, said “The accident happened around 5.25pm and involved a tanker loaded with petrol.  The tanker fell and spilled its content, causing fire which burnt 54 vehicles. The vehicles, which were of different models, were trapped behind the truck.

“Some motorists, who turned to run away, crashed into other vehicles. Some jumped out and others fell into the gutter in the course of running away. We found dead bodies on the ground and in the gutter. Some of the people who died in the gutter had probably been caught by the fire and jumped into the gutter to put it out.”

The Tanker was attempting to climb the road that leads to the expressway when it developed fault and starting spilling fuel.

The Lagos State Sector Commander, FRSC, Hygenus Omege, has confirmed the number of casualties in the fire:

He said: “It is obvious that the driver lost control of the tanker. We heard the tanker suffered brake failure. We have counted 54 burnt vehicles. Four people, who were rescued, are in the emergency unit and about nine bodies have been recovered.”