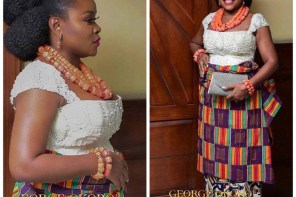 Talented Nigerian singer, Omawumi has officially become Mrs Yusuf today as she holds her traditional wedding with the love of her life Tosin Yusuf today in Warri, Delta state.

Omawumi had her first child for Tosin Yusuf in 2012 but didn’t make the marriage official until later when the two got married legally at the Ikoyi Registry.

Omawumi and her husband Tosin have two beautiful daughters now

and today, they have made it official by getting married traditionally, their family and friends celebrating with them.
Congratulations to the Yusufs.