Ooni of Ife Royal Lecture at The Chatham House

Chatham House, The Royal International Institute of Foreign Affairs in the United Kingdom which is acknowledged for its enviable scientific, political, economic and intellectual discourses played host to His Imperial Majesty (HIM) ?ba Adéyeyè Enitan Ògúnwùsì (Òjájá II), ???ni’rìsà of Ilé-If?? on the 23rd of November 2017 where he delivered a staunch lecture on the titled, “Inclusive governance and community engagement in Nigeria: The Roles of Traditional Rulers.

On arrival, ???ni Ògúnwùsì was warmly received to the Chatham House lecture host, Mr. Robert Dewar (CMG) who was formerly a UK diplomat that served predominantly in sub-Saharan Africa, including as British high commissioner to Nigeria and permanent representative to ECOWAS, ambassador to Ethiopia and permanent representative to the AU, high commissioner to Mozambique and ambassador to Madagascar. 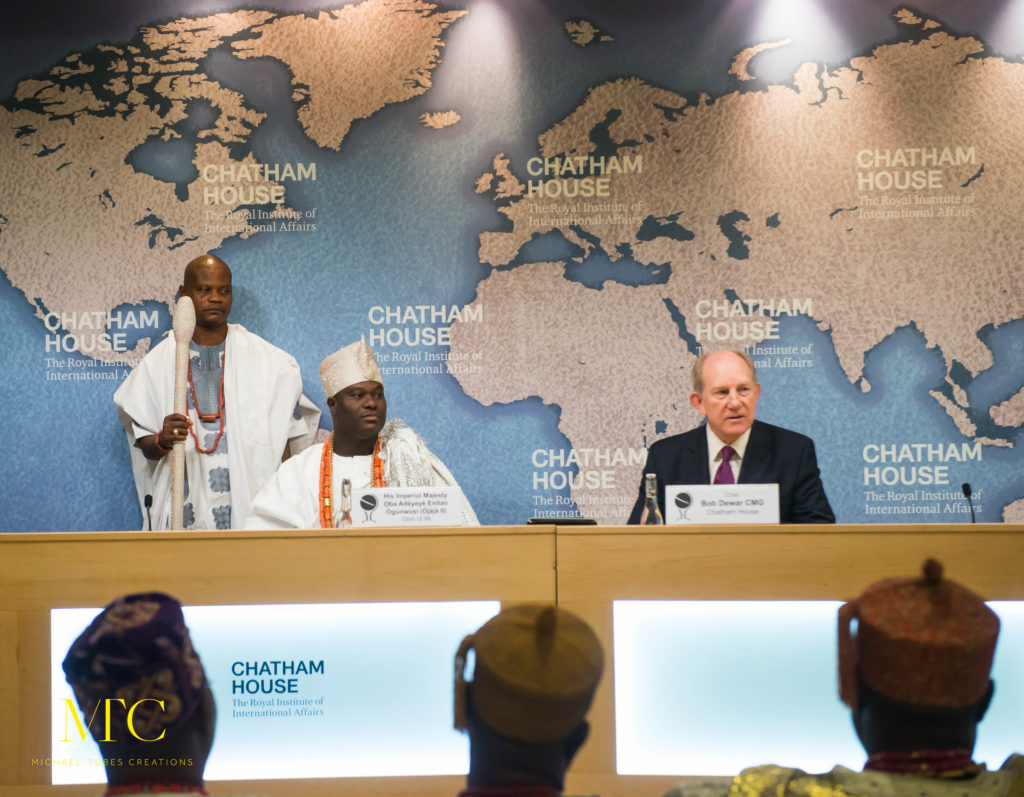 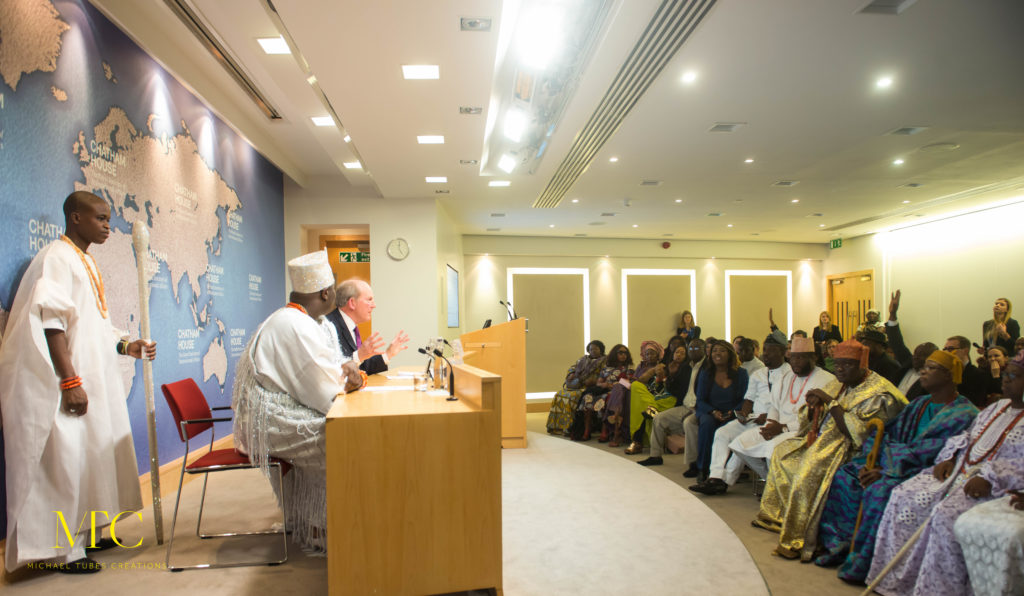 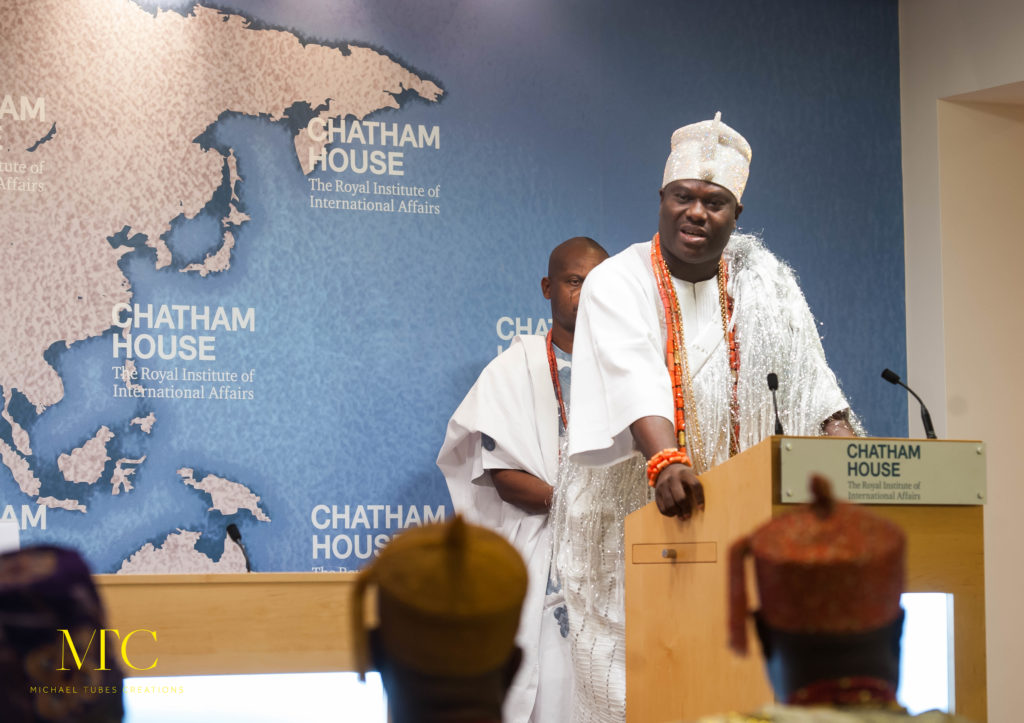 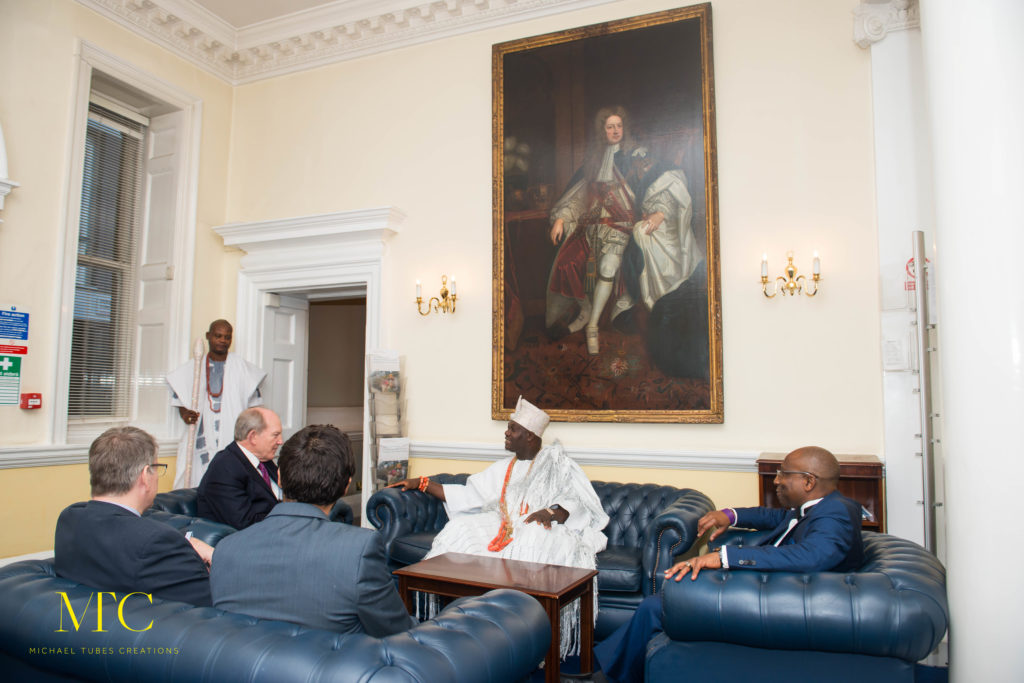 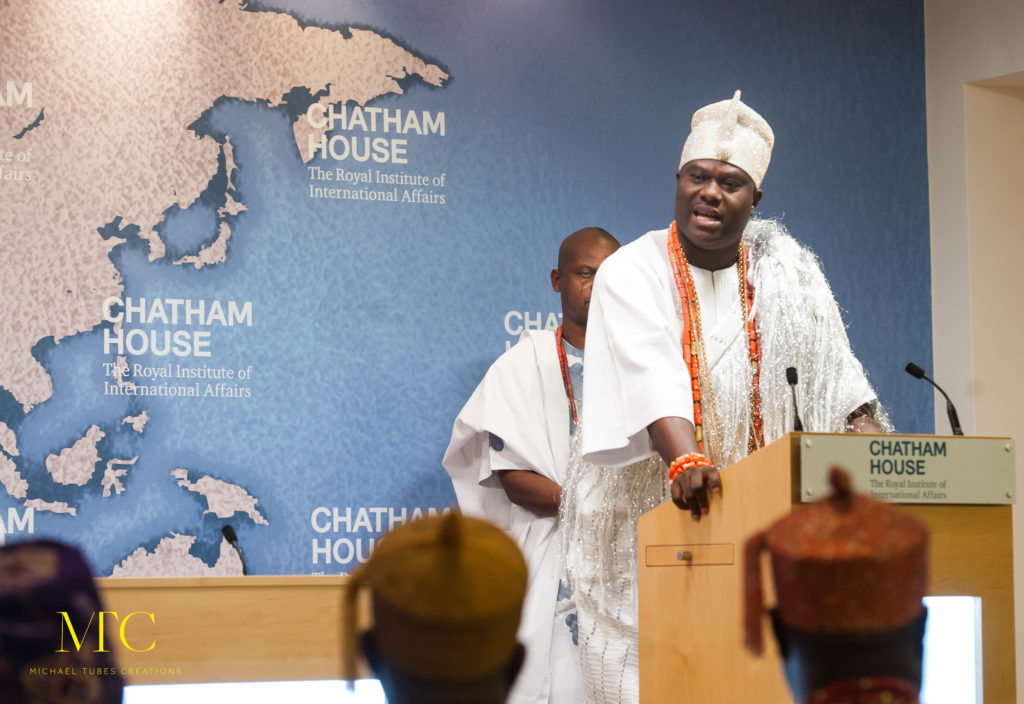 Within the official tradition and practice of the Chatham House, His Imperial Majesty (HIM) ?ba Adéyeyè Enitan Ògúnwùsì and Mr. Dewar CMG together with the Africa section Executive team of Chatham House led by Dr. Alex Vine OBE and executive members of Ooni of Ife Global Outreach (OIGO) that organised the lecture proceeded into private discussions in preparation for His Imperial Majesty’s lecture. At exactly 4 pm, Ooni Ogunwusi who is the first Nigeria Royal Father to be invited by Chatham House was led by his host into the lecture hall with a standing honour by all confirmed audience.

After the presentation of His Imperial Majesty (HIM) brief citation by the Chair of the lecture who is equally his host, Mr. Bob Dewar (CMG), as the revered king was clad in spotless, magnificent white agbádá attire; his neck and wrist decorated with befitting royal beads and even as a perfect royal crown sat on his head mounted the lecture podium, the fragrance of chants of reverence and praise of His Imperial Majesty (HIM) which was led by His Ìjálá ???ni consumed the air.

His opening remark was a chronicles of his upbringing which was communal in governance from where he led his audience into the widest and historical ethnographical thematic issues in governance. His lecture produced broad perspective of historical discourses and the evolution of modern democracies structure which was as a direct result of the monarchical governance adventure. ???ni Ògúnwùsì who defiled the conventional pattern of lecture presentation as he was not guided by any prepared script drum up support for collective and holistic inclusion of traditional institutions as they are closer to the grass roots agitation than government. In his final submission, ?ba Adéyeyè Ògúnwùsì presented Africa as the last economic frontier of the globalisation and called on African leaders to reintegrate traditional institutions into democratic system as they have huge inclusive roles to play towards better governance.

In his usual approach to humanity, His Imperial Majesty (HIM) ???ni Ògúnwùsì had ample time to chat with some folks and institutions that were represented on various subjects and issues.  Subsequently, he was taken round the building of Chatham House by both his host Mr. Bob Dewar CMG and Dr. Alex Vine OBE who is the Chatham House Research Director, Area Studies and International Law; Head, Africa Programme and was presented with the wall of Chatham House distinguished past speakers from Africa.

Man threatens to beat Woman Up after ...