The ELFIKE Film Collective, a partnership between EbonyLife Films, FilmOne Distribution, Inkblot Productions and Koga Studios is excited to announce that tables at the Grand World Premiere of The Wedding Party 2: Destination Dubai have sold out, one month before the event on December 10th. The few tickets remaining are those being sent to specially invited guests of the ELFIKE Collective. 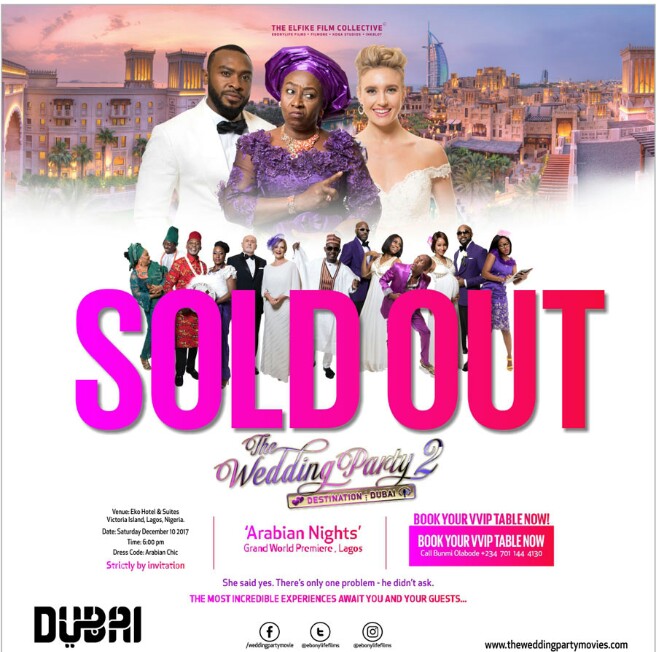 Preparations are now underway for the most spectacular movie premiere Nigeria has witnessed. Guests are already planning their ‘Arabian chic’ outfits, to tie in with the event’s theme, ‘Arabian Nights’, spurred on by the possibility of winning a 7-day Dubai Experience for ‘best outfit’. The theme will also be reflected in the opulent décor and a variety of exotic food, activities and entertainment, to highlight the film’s location in Dubai, one of the world’s favourite holiday destinations.

Mo Abudu, CEO, EbonyLife Films, is amazed at the response the premiere has received. “We expected the tables to sell out, but not this early. We are incredibly grateful for all the support from our corporate sponsors and partners. It’s guaranteed to be a memorable night,” she said.

Moses Babatope, COO, FilmOne Distribution, is excited about what the sold-out premiere means for the film’s box office prospects. “The response so far has been incredible – it shows the strength and appeal of the movie. Anyone who was not able to get tickets for the premiere should endeavour to book before the film opens on December 15.”

The Wedding Party 2: Destination Dubai will have its cinema release on December 15 in Nigeria. For more information, visit www.ebonylifefilms.com