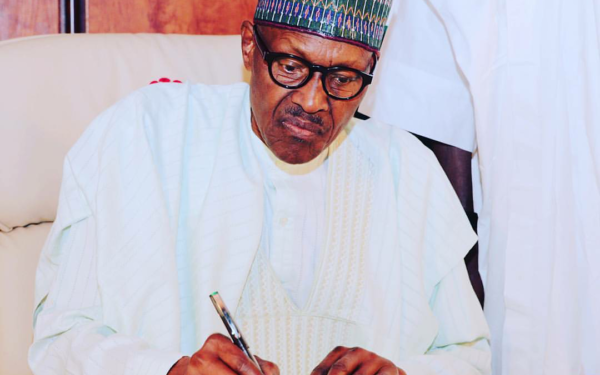 The Senior Special Assistant to the President on National Assembly Matters (Senate), Ita Enang, made this known in a statement on Wednesday.

According to him, the Act establishes the North East Development Commission.

He noted that the commission had the mandate to receive and manage funds allocated by the Federal Government and international donor agencies for the resettlement, rehabilitation, integration and reconstruction of roads, houses and business premises of victims of the insurgency.

He added that the Act would also help in tackling the menace of poverty and environmental challenges in the North –East.

“The commission will among other things coordinate projects and programmes within the Master Plan for the rehabilitation, resettlement, reconciliation, reconstruction and sustainable development of the North-East Zone.

“This will be done in the field of infrastructure, human and social services, including health and nutrition, education and water supply, agriculture, wealth creation and employment opportunities, urban and rural development and poverty alleviation.

“The commission will also liaise with federal ministries, departments, agencies, states and development partners on implementation of all measures approved in the Master Plan for stabilization and development of the North-East by the Federal Government.

“It will equally assess and report on any project being funded or carried out in the North-East by any federal ministry, department and agency or company that has an agreement with the Federal Government, and ensure that funds released for such projects are properly utilised.

“The commission will equally liaise with other stakeholders on tackling of humanitarian, ecological and environmental problems and degradation that arise from natural causes, insurgency and industrial activities in the North-East Zone,’’ he said.

Enang further said the commission would seek humanitarian, human, material, technical and financial support from development partners, local or international, and Non-Governmental Organisations, with a view to developing the North-East region.

He pointed out that the commission was saddled with the responsibility of co-coordinating civil-military confidence building, stabilization measures and activities that lie within the civil-military interface especially before, during and after military and security operations.

He stressed that one other key role of the commission was to act as the focal point to coordinate and harmonize all other interventions programmes and initiatives that the federal government was involved within the North-East.

The Senior Special Assistant said that the Act as assented to had been communicated to appropriate authorities.