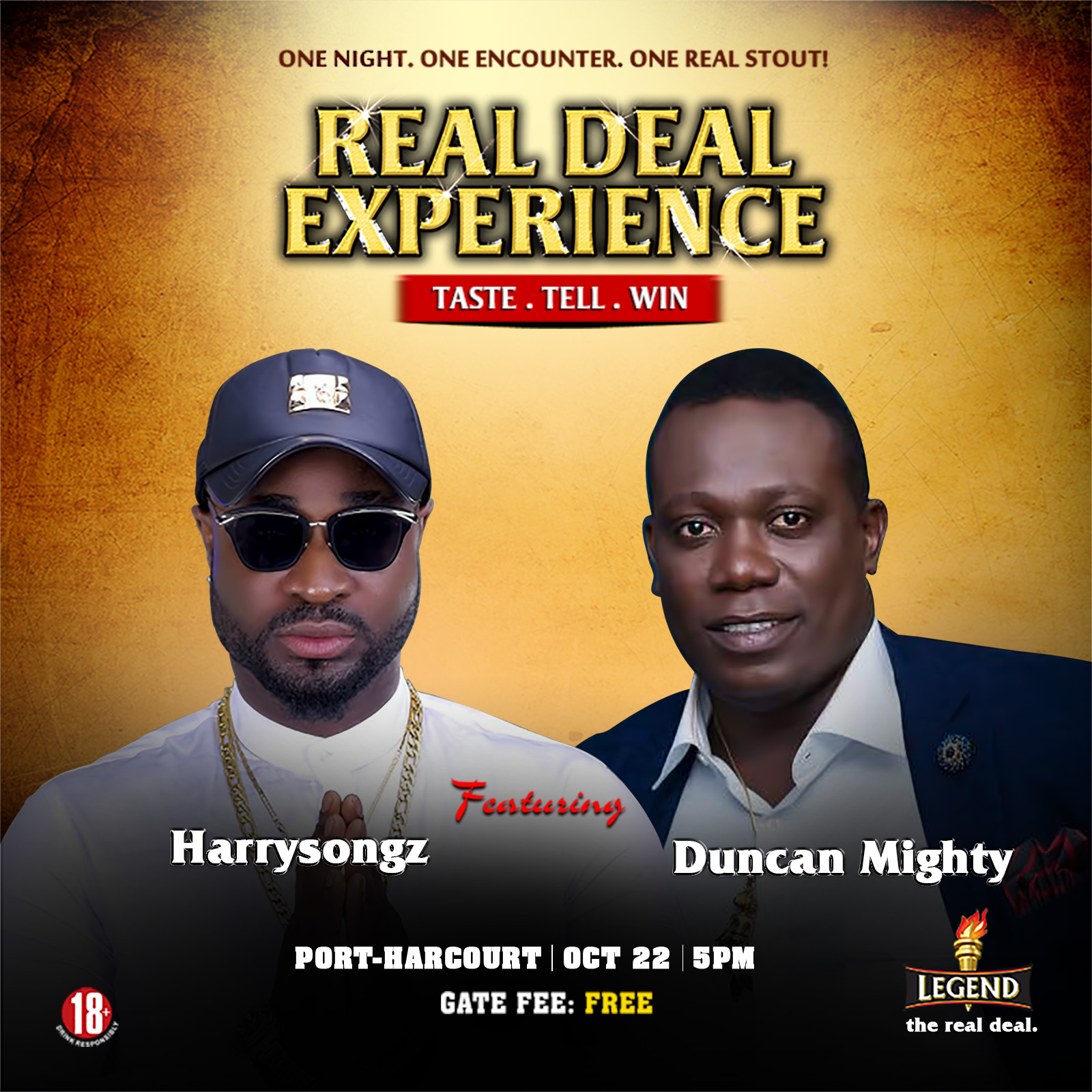 Duncan Mighty and Harrysong who both boasts of a huge following in Port Harcourt will perform live on Sunday, 22nd of October, 2017 at the Star Ground, 61, Elekahia road, Elekahia, Port Harcourt. The duo will delight the thousands of Legend Extra stout consumers and fans who will be thronging out in large numbers to enjoy a night of great music with their favourite stout.

The popular music tour which is making its first stop in Port Harcourt this year since 2016, is organized by Legend Extra Stout to better interact with its consumers. The tour takes Nigeria’s biggest music stars to various cities around the country to entertain fans and give them an authentic experience of the brand and their favourite music stars.

Unlike other similar branded experiential shows, the Real Deal Experience rather than simply picking a rave of the moment to headline the show, takes a completely different route. The stout brand selects a city and then finds the artiste with the most die-hard followers in that town to go headline the show.

This year, the Real Deal Experience has taken top Nigerian artistes to five cities where they have a huge local fan base. Timaya was in Nnewi in February and in Enugu in April, Orezi was in Uyo in the same month, Harry Song and Orezi set Aba on fire in May, M.I rocked Abuja in September. While 9ice and Small Doctor thrilled Lagos fans just some weeks ago to commemorate Nigeria’s independence. 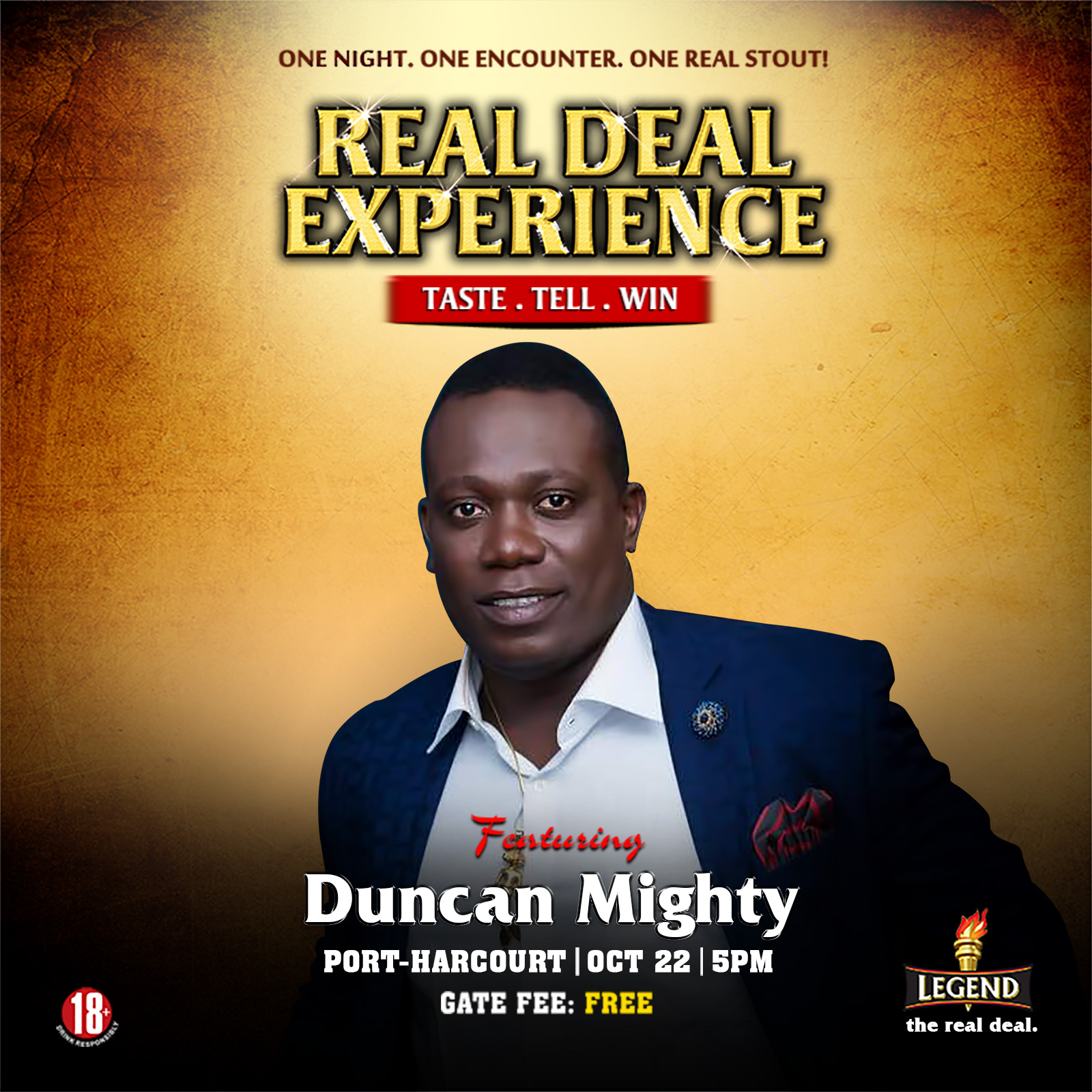 Now it is the turn of Port Harcourt and the premium stout brand is bringing Harrysong and Duncan Mighty to bring the real deal experience to fans and Legend stout consumers in the city.

In addition to the music and funfair, Legend will also reward guests with various gifts and prizes including generators, refrigerators, T-shirts and other branded gifts in the Taste, Tell, and Win game. While there would also be N50, 000 cash prizes to winners of the online talent competition on the brand’s social media pages.

“We are glad to be in back in Port Harcourt and this time we didn’t just come along with one, but two A-list music artistes who are very well loved by the people of this beautiful city. As you already know, the Real Deal Experience is about making people appreciate the realness and authenticity of the Legend brand, and bringing fans face to face with their favourite music superstars is a very engaging way of putting across this message.  We plan to visit more cities before the year runs out so fans in other cities should be on the lookout. We will be there soon.” 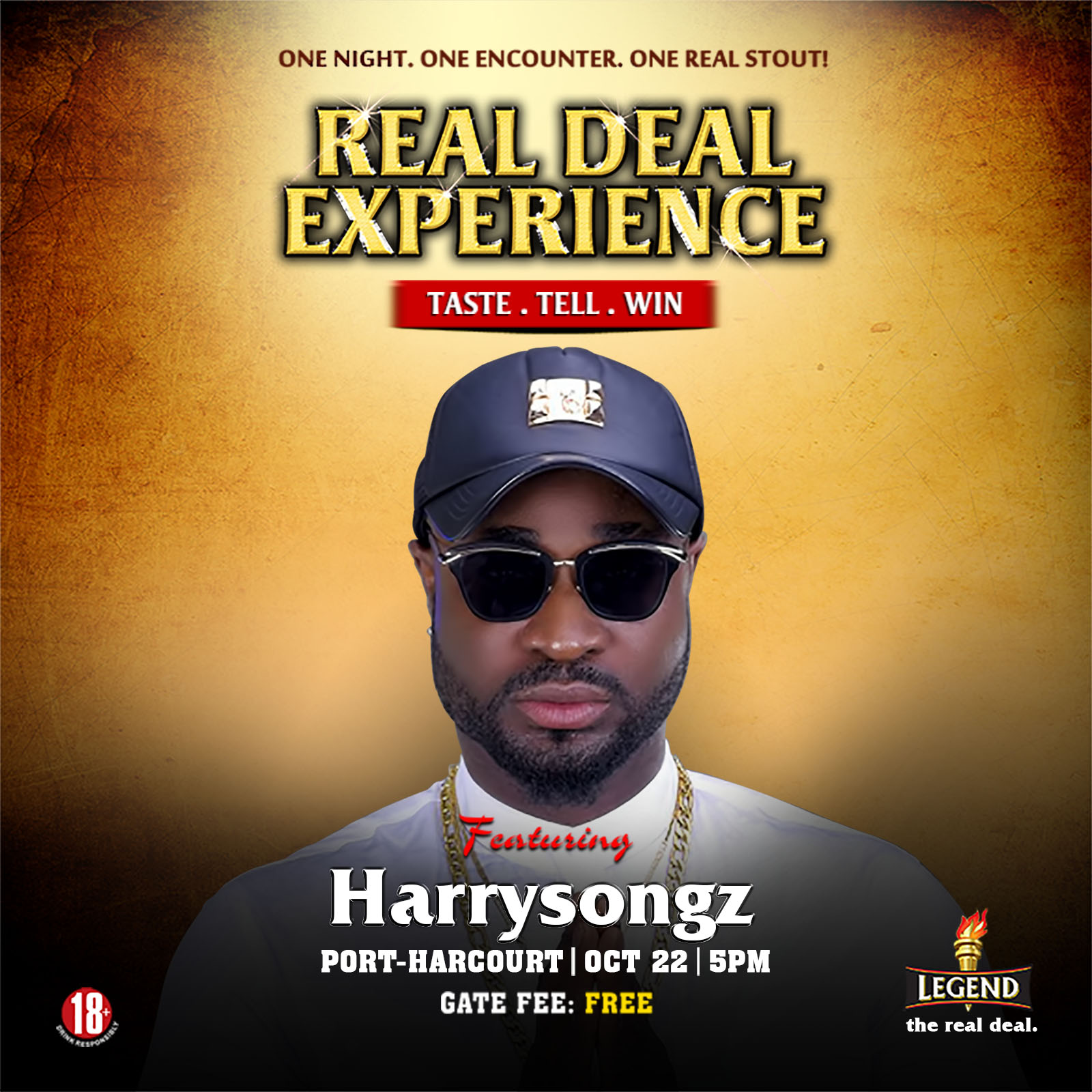 Also commenting on the upcoming Port Harcourt Real Deal Experience concert, Duncan Mighty said, “Port Harcourt is my home and there is no better feeling than performing right in front of your own people. These are the people who have supported me from day one of my career so I’m definitely going to give them one of the best performances ever.”

While an excited Harrysong quipped: “I hope my people in Port Harcourt are ready o…the real deal experience Port Harcourt show will be nothing like they’ve ever seen. It’s gonna be lit! Harrysong says so.”