Lady calls out photographer Owen, who has refused to return her wedding photos 3 months after

When Alero Agbeyi Enebeli contacted Owen to cover her wedding 3 months ago, it never crossed her mind that it will take an Instagram feud to get her photos. 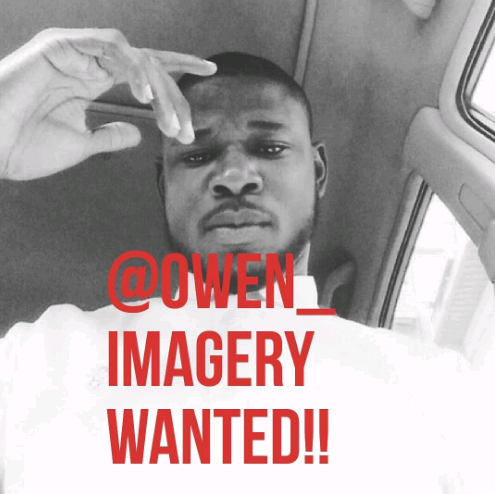 The new bride took her instagram page to call out the photographer Owen (@OWEN_IMAGERY). Stating that she is yet to receive her photo book and videos.

“Owen! Owen!! Owen!!! The only thing I did wrong was contacting you to come cover my wedding without asking  around properly about you. Let’s not go into how rude you are Owen, how u were rude to my husband before our prewedding shoot and how we will call you even after making Ist deposit and you’ll keep asking who is this? I remember begging you to please save my number and that you can delete it after my wedding. Or is it how we’ll call you and you won’t pick and you’ll either not return our calls  or call back days after, or sending you messages on WhatsApp and you won’t read or reply even though you’re online? Or reply after days or after we would have called and plead with you to reply our message? The red carpet backdrop I told you I wanted was different from what you did, you just did what you liked and sent it.
Now to your main f**k up. We spoke on the phone a day before my traditional wedding and you never mentioned to me that you won’t be coming to cover my wedding, i was shocked when i saw two other guys and then i thought since i’m meant to have two videographers and two photographers you will still show up, till tomorrow i did’nt see this scammist called @owen_imagery, imagine for example you paid for a particular makeup artist to come do your makeup and on the morning of your wedding you see someone else, even if you’re sending your assistant, it is by all means compulsory that you let your client know, now Owen don’t give me that crap saying @Owen_imagery is a company and you sent your workers to me, LIE. You actually outsourced the job to someone else, without consulting me or my husband, the guys you sent DO NOT work for you they have thier own business name, how unprofessional. I chatted you up and that was when you told me you’re on your way to Lagos. And I later saw that you went to cover another wedding in Lagos which I really don’t care about if u had sent me 2 videographers and 2 photographers.  Most importantly as if that was’nt bad enough the package I paid for comes with two videographers and 2 photographers, I only got one videographer and 1 photographer.

The photographer on reading this, sent a message to the lady’s husband. 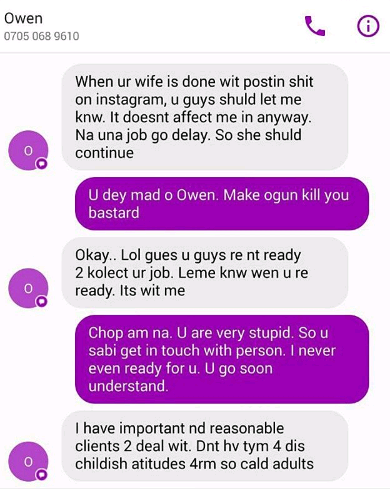 “So Owen decides to send my husband this message just now. Well done. We will see how this will end. @owen_imagery just see how you’re using your own hand to ruin ur life and career.” Alero wrote.

Owen the photographer is yet to respond to the allegation on Instagram.

This is bad, real bad…………. Remember this Keri Hilson’s line?

My Generation Did Many Wrong Things to ...