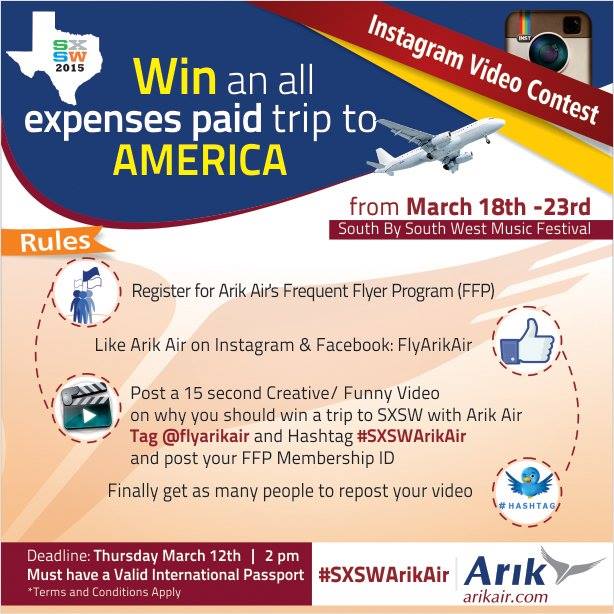 Arik Air ,West and Central Africa ‘s largest airline once again celebrates her proudly African heritage by becoming the Official airline partner for the “Sounds from Africa” stage at the upcoming South by South Festival in Austin Texas, USA.

As part of her support towards promoting the African culture and heritage in the Diaspora, Arik Air is taking one of her loyal guests on an all-expense paid trip to Austin, Texas to enjoy the blend of the sounds from Africa and the Caribbean.

The event which holds 17th – 22nd of March 2015 will see one lucky guest win free flight ticket, accommodation and feeding.

However, aside from having a valid International passport you must do the following before you can be selected:

Arik Air has been serving the Lagos to New York route for more than five years now and will be flying the lucky winner to New York for onward connection to Austin, Texas.

South by Southwest is a large conference, trade show and music festival which hosted about 45,000 attendees in 2014.

It features Sounds from Africa and Sounds from the Caribbean. This event will take over Palm Door on Sixth (508 E. 6th Street) for a crazy double-stage show at the 2015 SXSW Music Festival on Friday, March 20.

Arik Air proudly “owns” the African stage which for the first time is being staged separately from the Caribbean Music.

Other artists scheduled to participate in the show are Samini, Sarkodie, Serge Beynaud, Victoria Kimani and R2Bees.