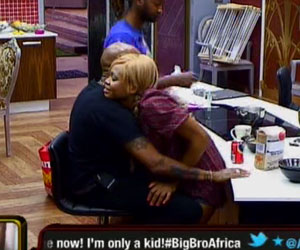 Missed anything from the Big Brother StarGame yet? Here’s some gist of what’s been going on in Africa’s biggest reality TV show!

Call it Big Brother Star wars over the weekend and you can’t be wrong as fights broke out in both the Upville and the Downville! While the housemates at the Downville got physical over the head of house’s decision as to how the alcohol should be rationed before the Saturday night party, the stars at the Upville took on a word lashing battle with Prezzo’s spit-fire tongue drawn at South African Barbz. And with Barbz composure while Prezzo lashed on at her lifestyle, age, career and what the 34 year old could do with her life after she’s evicted (as Prezzo was very sure she will be evicted soon), one may not be convinced at first
that the two were staging a cold war!

And over the week, sibling disputes that erupted between the Botswana sisters, Edith and Eve during the Saturday night fight have been settled and a verdict has been passed on the Downville by Big Brother. Alcohol will no longer be supplied to the Downville housemates! The Nigerian duo Ola and Chris seem to be keeping their pace of entertaining the fellow housemates and with Ola even getting into some romance with Junia from Namibia, both have been stealing kisses every chance they get. Well, love affairs as from the first week and despite disputes and paranoia, kept building on the Big Brother horizon both in the Upville and the Downville. And in the Upville, Nigerian Goldie is wrapping herself in a love circle around Prezzo! We’re sure Goldie knows Prezzo is married! Wait, our Naija pop star may just be living up to her husband-snatching charisma that she claimed in her most popular song! Mo le gb’oko l’owo eh….