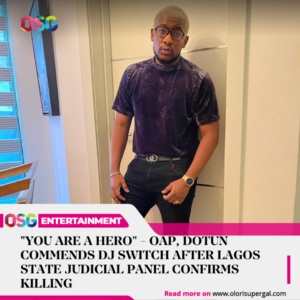 This comes following the report of the Lagos State Judicial Panel on EndSARS which confirmed exactly what DJ Switch showed the world on her Instagram Live broadcast on the evening of 20th October 2020.

Earlier, the shootings had been tagged as false news by the Federal Government making it seem like DJ Switch and others made up false claims.

However, the panel states otherwise and indicated the soldiers and officers of the 65 Battalion of the Nigerian Army and Police.

Reacting to the development through his Instagram page, Do2Tun shared a picture of DJ Switch and called her a Hero.

”You are a Hero DJ Switch

“Thank you again for doing the right thing in the midst of naysayers. You were too ahead of a few of them and you have proven it #EndSARs ‘

Singer, Falz Advises Youths Ahead Of The ...