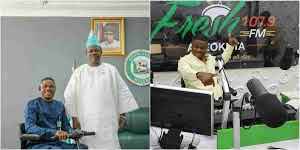 Ayefele was received in the state by Governor Ibikunle Amosun.

The Oyo State government early on Sunday morning demolished the Music House that was home to the radio station, along Challenge Road in Ibadan, with the claim that the building was constructed along the road and actually obstructs vehicular movement.

The order to demolish Ayefele’s Music House was initially denied by the state government, with the governor Abiola Ajimobi stating that he was not aware of the planned demolition.
However a statement released later by the government listed the faults of the owners of the building.