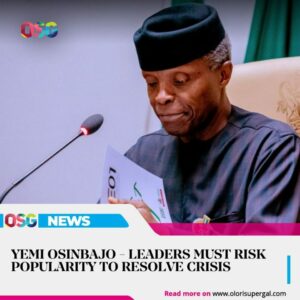 The Vice President of the country, Professor Yemi Osinbajo has said that in situations of conflict, including ethnic and religious tensions, leaders must be willing to make sacrifices even at the risk of their popularity to attain long-lasting resolutions.

Osinbajo, stated this on Monday, 30th August, when he received a delegation from the Muslim Public Affairs Centre (MPAC) led by its Executive Chairman, Disu Kamor, at the Presidential Villa, Abuja.

Laolu Akande, Senior Special Assistant to the Vice President on Media and Publicity, disclosed this in a statement titled, ‘In resolving conflicts, leaders must make sacrifices, risk popularity—Osinbajo’.

Osinbajo said, “There is a need to understand that there is no way that we can deal with the tensions between the faiths and ethnicities in Nigeria today unless those in leadership are prepared to make some important sacrifices.

“Those sacrifices are sacrifices even in what you say, how you say it, and then sacrifices also in the acknowledgment of whatever people are saying and the willingness to accept.

“It is very important that we don’t diminish the importance of language and respectful non-violent communication so that we can keep our discussions at a level that ensures that we don’t degenerate too quickly to violence.”

Disu Kamor, the leader of the group, noted that MPAC has been involved in programmes and activities aimed at promoting cohesion among people of different faiths over the past decade.