The controversial ban on the use of Islamic full face veil in public spaces took effect on Wednesday in Denmark. This has led women to protest the new measure which fines anyone dressed in such manner.

The protest took place in the capital Copenhagen and the second-biggest city Aarhus late Wednesday, with many defying the law and wearing the full-face veil. Human rights campaigners are against the ban and have slammed the ban as a violation against women’s rights. 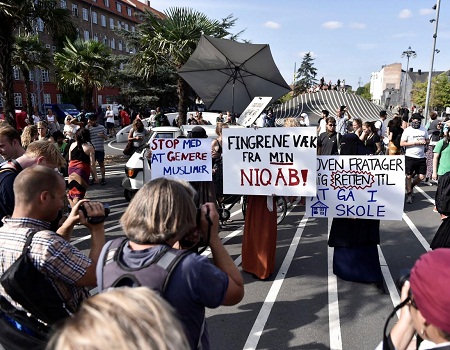 Supporters of the ban argue that it enables better integration of Muslim immigrants into the Danish society.

The ban also targets other accessories that hide the face such as balaclavas and false beards. Wearing a burqa – which covers a person’s entire face – or the niqab – which shows the eyes only – in public attracts a fine of 1,000 kroner ($156). Repeated violations will be fined up to 10,000 kroner.

A 30-year-old Muslim woman interviewed in daily Berlingske, identified only as Sarah, said she had “lost faith in the system.” Born and raised in Denmark by parents who emigrated from Turkey, she has worn the niqab since she was 18.

“I’ve realized that democracy doesn’t work. Politicians boast of freedoms and rights when they are making fun of Muslims and when they are drawing caricatures of the prophet. But when it comes to me, they take away my right to choose how I want to dress.

“I have come to the realization that Muslims don’t have the same rights as others. So much of politics is hypocritical.”

According to Sarah the ban risked having the opposite effect of increasing segregation rather than integrating Muslims into the Danish values.

“When the mosque is one of the few places where we can (wear veils), then I think the law will mean that more people will go to the mosque.”

The ban has been frowned upon by Amnesty International who condemned the law as a “discriminatory violation of women’s rights,” especially against Muslim women who choose to wear the full-face veils.

Deputy Europe Director, Fotis Filippou in a statement explained that: “If the intention of this law was to protect women’s rights it fails abjectly. Instead, the law criminalizes women for their choice of clothing – making a mockery of the freedoms Denmark purports to uphold.

“Whilst some specific restrictions on the wearing of full face veils for the purposes of public safety may be legitimate, this blanket ban is neither necessary nor proportionate and violates women’s rights to freedom of expression and religion,” he added.

A spokesman for the Copenhagen police said they did not plan to fine the protesters who violated the ban.

The full-face veil is a hot-button issue across Europe. The European Court of Human Rights last year upheld a Belgian ban on wearing it in public.

France was the first European country to ban the niqab in public places with a law that took effect in 2011 while in Germany a partial ban on “covering the face” was approved last year.