Woman Duct-Taped On Plane, After She Tried To Open Door mid-flight 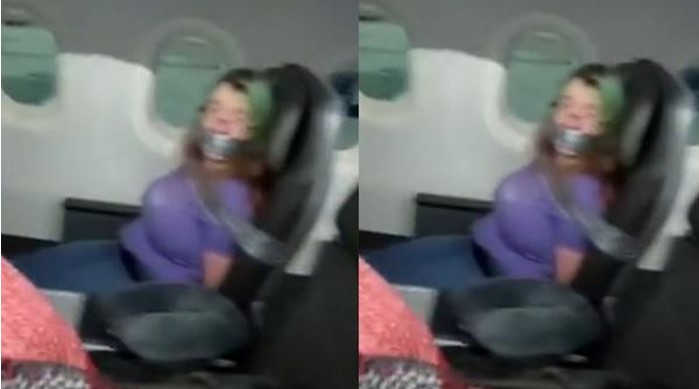 A woman, was duct-taped to her seat, on an American Airlines flight, attempted to open the plane’s front door.

The incident happened on American Airlines Flight 1774 that was traveling from Dallas-Fort Worth, Texas to Charlotte, North Carolina on Tuesday, July 6, but a TikTok video of the incident went viral over the weekend after it was shared by TikTok user @lol.ariee.

She said commotion started one hour into the two-hour flight when “all flight attendants were running up and down the aisles, whispering to each other.

The pilot finally spoke over the intercom and asked people to stay in their seats because of “a bad situation in the plane,” though he did not elaborate further.

As the plane was landing, a flight attendant who sat near the passengers explained that a woman who was going through an apparent mental breakdown, “had an outburst” and attempted to get off the plane.

She was saying, ‘I need to get off this plane,’ and she went up to the exits and started banging on the doors, saying, ‘You need to let me off this plane!

The woman reportedly got aggressive, biting, spitting, and attacking flight attendants, so this prompted airline crew to “take her down” and duct tape her mouth.

American Airlines confirmed to the New York Post that a woman “attempted to open the forward boarding door” during the flight and was restrained “for the safety and security of other customers and our crew.”