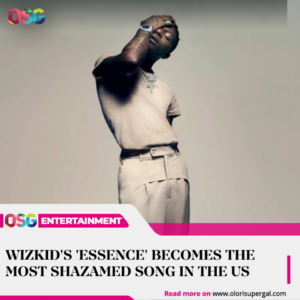 This, after his hit song, “Essence” which features Nigerian female singer, Temilade Openiyi better known as Tems, becomes the “most Shazamed” song in the United States of America.

This was revealed by the music-search platform on its website as they shared the Top 200 Most Shazamed songs in the US.

Essence is part of his fourth studio album titled ‘Made in Lagos’ which was released in October 2020.

A few days back, WizKid, took to microblogging platform Twitter to write that he is not the best in the music industry. This, however, got people talking.

“I’m not even really the best in this shit. I just make some good shit!”

The tweet came few hours after the release of his new album dubbed, MADE IN LAGOS – DELUXE EDITION.