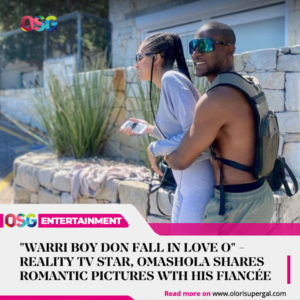 Former Big Brother Naija Housemate Omashola took to social media to share beautiful pictures with his fiancée a few weeks after he proposed to her.

Omashola who is also a model and entrepreneur revealed he met his fiancee at the ATM and needs no one to tell him they were meant for each other.

He also started that his fiancee is his most significant prayer, and he’s thankful to God for her love and support.

“From the very first day I saw you at the ATM I new you were the one and I told you right there that I will marry you and you will be the Mother of my kids.

“You are my biggest prayer and I thank God for your love and support. Till the wheels fall off.

Get More Value From DStv With The ...